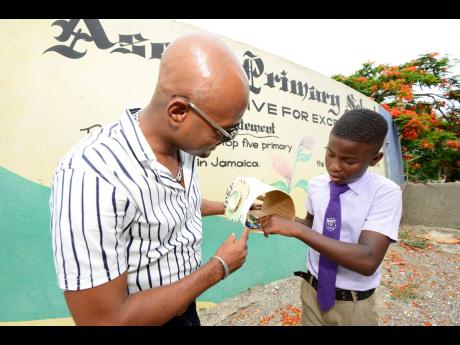 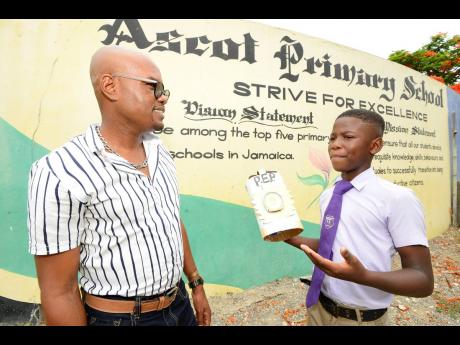 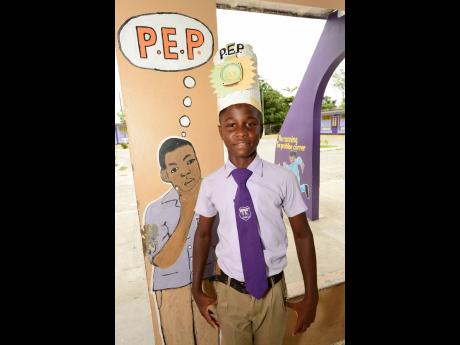 Ian Allen/Photographer
Shadarie Lodge, a student at Ascot Primary School in Portmore, St Catherine, poses with his PEP hat that can play music via Bluetooth technology.
1
2
3

At first glance, it looks like a plain cardboard hat, but a closer look will reveal a circular piece of metal that can be found on most speakers.

This was 12-year-old Shadarie Lodge’s take on Crazy Hat Day for the recently concluded school year.

The outgoing student of Ascot Primary School was assisted by his uncle to create the hat, which has Bluetooth capabilities.

He calls it the PEP hat, symbolic to him being in the first batch of students to sit the Primary Exit Profile (PEP) high-school placement examinations this year.

The hat was made only the night before the competition for which Shadarie was a contender.

When the day arrived, he took his creation to school concealed in a box with eager classmates hounding him to get a peek at the hat. But Lodge waited for devotions to make the grand reveal.

And it was worth the wait. The hat was a big hit, crowning him king of the competition again this year.

Shadarie says he did not give much thought to the design. The pine shape at the front, he said, was decorated with paint he found at home to make it colourful.

His efforts were mainly concentrated on the functionality of the item as he sourced electrical parts “from out of a mash-up boom box”.

It took the youngster half an hour to make the hat, but he was unable to successfully connect it via Bluetooth on the first attempt.

“When it connect, I was so happy ‘cause I said if it nuh work, mi nah guh school tomorrow,” he said.

For the hat to work, it has to be sufficiently charged. He demonstrated to The Gleaner how to turn the hat on, pair it with another Bluetooth device, and play a song.

He said he had no fears working with electrical wires as “the battery in dis nuh powerful enough fi shock me”.

And although Crazy Hat Day has passed, he is still not done with the project. He plans to add to the design by experimenting with lights.

“It proves the high degree of technological skill that children have,” Jackson told The Gleaner, adding that PEP was helping students to unlock their potential in other areas outside of academics.

“What I love about PEP is that it doesn’t [only] cater to the academic strength of our students. It encourages creativity among them. The content is given and the children bring their own meaning to it,” the principal of the Portmore, St Catherine-based school said. “The hat is a manifestation of what the National Standards Curriculum has now embodied, and PEP comes on now and just facilitates that because PEP focuses really on critical thinking.”

Though his innovation is closely related to science, Shadarie said that his favourite subject is language arts.

“If we taught electrical installation in primary school, it would appeal more to some of these learners,” Principal Jackson reflected.

Lilieth Sinclair-Plummer, Shadarie’s grade five coordinator, said that when he brought his masterpiece to school last year, she was very impressed with it and encouraged him to keep using his creative juices.

“The first time he did it, I was so enthused that I borrowed the hat and I wore it. I said it to him, ‘You can become a great businessman. By making this hat, you can sell the prototype, you can own it and let others utilise it’,” she said.

Shadarie, who harbours dreams of becoming a soldier, will be attending Waterford High School in September.