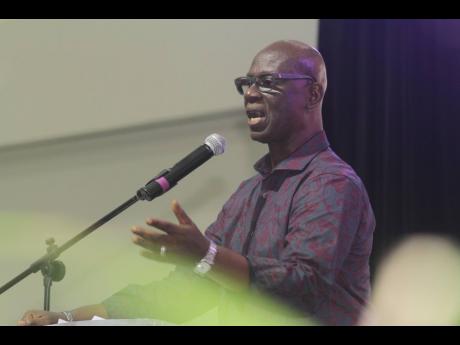 Local Government Minister Desmond McKenzie has threatened to pull the plug on the much-heralded Youth Summer Empowerment Programme should there be any semblance of malpractice in its implementation.

“I have been getting complaints about the behaviour of some of the young people in the programme. Let me make it quite clear, abundantly clear, this is not a political programme. I don’t care which mayor or which councillor recommend you for the job,” McKenzie said.

He was speaking at the launch of the Ministry of Local Government and Community Development Youth Summer Empowerment Programme at the Montego Bay Convention Centre in St James on Thursday.

“It is not the mayor or your councillor that will keep the job. It is your performance that will determine whether or not you remain in the job,” he said.

“I don’t want you to develop this attitude as if to say, ‘Well, I don’t have to do anything for the money’. It’s not going to work that way. If you don’t work, you will not be paid, and I urge you not to allow this group to be the group that give the programme bad marks,” McKenzie told the youngsters.

“I will not be afraid to stop the programme in the middle of the race,” he added. “This country is experiencing too much indiscipline, and a lot of it can be attributed to our young people.”

McKenzie said that this year, the programme is trending towards 4,000 persons, which is a significant increase of close to 1,000 over last year.

He said that the programme, which started three years ago, will commence work on July 22 and continued for six weeks until August 30 and will see young people working in their local communities across the 14 parishes under the immediate supervision of the municipal corporations, collecting critical data to help improve service delivery within the ministry.

He added that each youth employed under the programme would be provided with a weekly remuneration of $8,500, while their supervisors would receive $9,500 per week.