Child services to do survey, clean-up of children on the streets 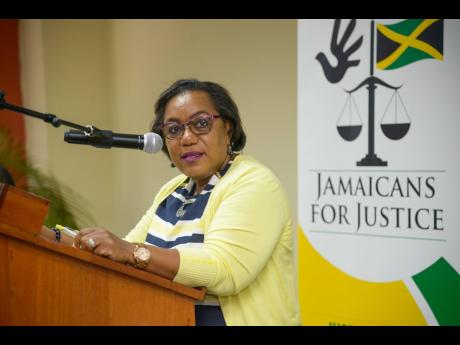 Chief executive officer of the Child Protection and Family Services Agency (CPFSA) Rosalee Gage-Grey disclosed that her agency was about to embark on a survey to identify the number of children living and working on the streets in order to rectify the problem.

Gage-Grey told the gathering at the recent Jamaicans for Justice child-protection seminar and booklet launch, held at The University of the West Indies Regional Headquarters in Mona, that the agency would be targeting the at-risk youth for intervention.

Noting that the agency receives several calls from concerned persons when they see children in danger on the streets, she said: “We have been going to the regular spots in search of children – Liguanea, Half-Way Tree, Dunrobin, Constant Spring, Waterloo, Hope Road, Three Miles, and those areas.

“I remember once stopping at Three Miles and a little boy came to my car and I pulled out my ID and said, ‘You are not supposed to be on the road,’ and he read it and said, ‘Is you name suh!’ and ran off. So obviously, they know, and know their rights, too.”

According to Gage-Grey, the survey on the ground suggests that the children seen on the streets are in school.

“Most of them are attending school, but they come out at nights or afternoons or early morning. With the holidays, we have been getting more reports,” she said.

The CEO of the CPFSA believes that in most cases, money is the main reason the children are on the streets.

“It’s an economic thing, what they can earn. We have heard stories of what they earn on the road. Sometimes it’s more than the minimum wage their parents get elsewhere. We are doing the survey, which should be out shortly, so we can do a proper report and fix that problem,” she stated.

A UNICEF Situation Analysis of Jamaican Children report in 2018 revealed that Jamaica acknowledges children’s rights under the Convention on the Rights of the Child (CRC) and seeks to safeguard those rights primarily through efforts made by the Government, and with support from and/or oversight by civil society.

An excerpt from the report reads: “The country has, in recent decades, modernized its public institutions and strengthened the protective environment in order to secure the welfare of children. Some of these changes were prompted by Jamaica’s ratification of the CRC in 1991, the tabling of the Keating Report in 2003, and by increased advocacy by non-governmental agencies. The CRC underlines the importance of family in children’s lives and makes clear governments’ responsibility to promote familial care and reunification and to provide appropriate alternative care for all children who have lost the care of their parents.”