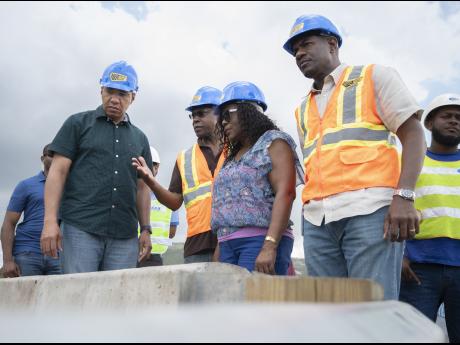 Prime Minister Andrew Holness (foreground left) in dialogue with Everton G. Hunter, chief executive officer, National Works Agency; Audrey Sewell (second from right), permanent secretary in the Office of the Prime Minister; and Varden Downer, acting deputy director of project implementation, atop the overhead pass on Mandela Highway in St Andrew yesterday, during a tour of the Corporate Area road projects currently being implemented with an extended deadline of September 2019, ahead of the new school year.

Indisciplined motorists are creating undue hardships for law-abiding drivers on one of the major highways connecting Kingston to other sections of the island, and Prime Minister Andrew Holness has taken the National Works Agency (NWA) to task to find a fix.

Yesterday, Chief Executive Officer of the NWA E.G. Hunter told the prime minister that unruly motorists were creating four lanes on a dual-carriage section of the Mandela Highway, which brought west-bound traffic into Portmore and Spanish Town.

Just over the Highway 2000 ramp and in the vicinity of the turn-off into Portmore, Hunter said the left lane of the dual carriageway is dedicated for the highway traffic, but some lawless motorists continue to abuse the road and its infrastructure.

“We had to put candlesticks all the way down just to get people to stay in that lane, and they are knocking them down. What we are contemplating doing is to have the candlesticks first, and at the latter part of it, have some more permanent structures just to compel people to stay in the right lane,” Hunter said, mentioning that traffic cameras would also be installed.

“It is not an engineering problem so much so as it is a behavioural, indiscipline problem, which we are trying to use engineering to solve. [Only] if motorists were to follow the rules!” the prime minister lamented.

“Come Monday evening when the traffic is coming in, you will have enforcement there, which will ensure you don’t have that four lane, and you are going to be starting as quickly as possible to put in place your Jersey barriers to ensure people stay in the right lane,” Holness stated.

As he toured the rest of the newly asphalted highway, Holness went to inspect a bridge near Ferry that will facilitate traffic from the highway to nearby businesses.

Holness observed that sections were incomplete but raised concerns about the absence of adequate barriers to protect pedestrians who could fall below into the path of oncoming vehicles.

He said he was particularly concerned about the lack of protection for children.

“We have to make an appeal using this bridge not to throw anything over, not to lean on this temporary barrier. In the future, you will have to put up a more substantial barrier. Children coming from school, playing, any accident can happen, and so on, so we have to look out for them,” the prime minister said to NWA officials yesterday.

Gleaner sources have said that some trucks have had difficulties negotiating the corner of the bridge, however, an NWA official responding to the concern said they have used massive trucks from a Corporate Area trucking company to test whether loaded trucks could manoeuvre the tight space.

“They did, and we are satisfied that other trucks can do so as well,” the official said.

The NWA officials said yesterday that sections of the highway would be landscaped but also complained that garbage continued to enter the drainage system, which could result in flooding.

“Throwing your garbage through your window while you are driving, it’s bad environmentally, and it is also bad for the maintenance of the infrastructure. It is common decency that you don’t do that,” Holness added.