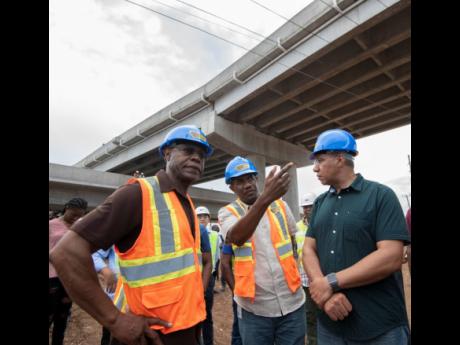 Work on the major road projects will have to go into overdrive in the capital city as Prime Minister Andrew Holness yesterday demanded that the works be finished before the start of the new school term in September.

As he walked the dusty dirt road in the Manor Park area, a woman protruding through the window of a bus shouted, “Make sure we get the road fi September morning!”

An animated Holness turned to E.G. Hunter, the chief executive officer of the National Works Agency, who was on the tour with him, and said, “See, see! Di people dem want the road for September”, pressing home the need for the works to be completed.

The prime minister also managed to greet residents who had major concerns about the dust nuisance.

The works have been under way since late 2018.

“I think this is a major investment and it is worth it. The challenge now is to complete it. We have missed at least two deadlines, and I am saying that we cannot move past September the first,” Holness said in the presence of Hunter and high-ranking officials from the China Habour Engineering Company.

Hunter told the prime minister that a major reason for the hold-up were the delays in settling land acquisition for the properties, including the Constant Spring Market.

A senior engineer working on the project, who did not want to be identified, expressed confidence that the major work would meet the September 1 deadline.

“I believe we will make it. It is a tough ask because none of these works have been easy, but I think we will have something in place, and we won’t have the nightmare that we had when we just started,” he told The Gleaner.

The prime minister noted that he had heard the complaints from motorists and pedestrians who use the roadway but stressed that there was a long-term benefit to flow from the new infrastructure.

Already, the prime minister said, requests are being made for major developments to take place along the Constant Spring Road and Manor Park corridor. He said that property values have increased and the foundation was being laid for residents living along the corridor to get full access to government services.