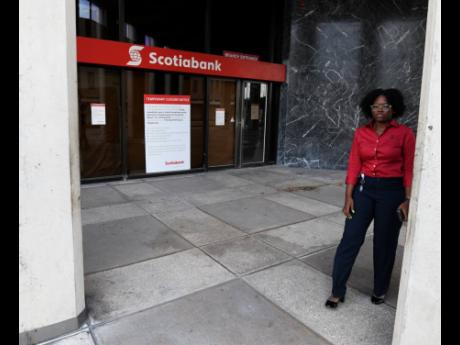 Ricardo Makyn/Chief Photo Editor
A temporary closure notice at the entrance to the Scotiabank Centre and Executive Branches at the intersection of Duke and Port Royal streets in downtown Kingston.

Local government authorities have confirmed that a cease order was issued on refurbishing operations at the Scotiabank Centre in downtown Kingston for breaches of the Building Act and code.

On Sunday, the chief executive officer at the Kingston and St Andrew Municipal Corporation (KSAMC), Robert Hill, confirmed that the corporation had instructed the institution to halt works roughly two weeks ago.

“A major refurbishing project was commenced by Scotiabank and our engineers had issued them with a cease work notice because a permit was not applied for and the city did not know anything about it,” he told The Gleaner.

He insisted that restrictions within the Building Act and the Building Code must be adhered to, “which Scotiabank, wittingly or unwittingly did not.

“We had to issue them notice for them to comply and do the normal application. We then will do our range of inspection, and then after that is satisfied, we can permit the work to continue,” Hill told The Gleaner.

He said the action taken by the KSAMC was proof that the local authority was committed to the rule of law and was not prepared to look the other way when certain entities or persons committed breaches.

“I advise persons who wish to deal with construction – refurbishing projects in particular – that the KSAMC must grant approval for these types of work, regardless of how minor it is. That goes for residential, commercial or industrial,” Hill said. “We deal with Building Code enforcement at all levels, regardless of strata or economic background. That doesn’t matter to us. We have to enforce the law wherever a breach is reported or sighted.”

When contacted, Scotiabank explained that the renovations were a part of a major project “with several moving parts” and that it would be seeking dialogue with the KSAMC in order to secure the relevant permits.