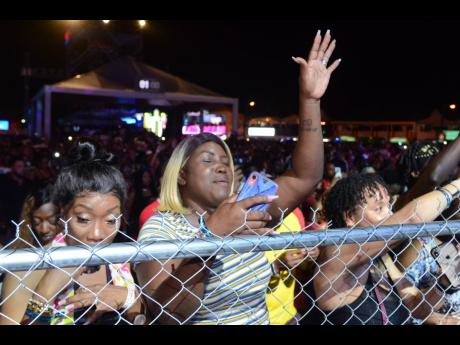 Kenyon Hemans/Photographer
Patrons enjoy a Sumfest performance on the weekend. There are concerns that the festival has outgrown its Catherine Hall home.

While agreeing that the Catherine Hall Entertainment Centre was overwhelmed by the number of patrons at the two main nights of Reggae Sumfest 2019, both the Montego Bay Chamber of Commerce and the St James Municipal Corporation are rejecting the view that the festival has outgrown the venue.

In fact, both Montego Bay mayor, Homer Davis, and chamber boss Janet Silvera believe that with some amount of rearrangement, expansion and tweaking, the venue, which has been the home of the annual festival since its inception in 1993, can continue to serve in that capacity.

“I don’t know if it is necessarily true that Sumfest has outgrown the venue. We have to take into consideration the Buju factor in terms of having a larger-than-normal turnout,” said Silvera. “I don’t think the layout, which included an extended VVIP area, helped, as it limited the ability to move around the venue. Also, there were far too many chairs, which took up a lot of space.”

Davis believes that if expansion is required, there are enough available lands at the back of the facility to cater to that need, as he pushed back against suggestions that the popular week-long summer festival should be moved to a more spacious location, possibly in another parish.

“We have large acreage of lands behind the existing venue. The only problem is that it might impact the parking, but instead of having everybody driving to the venue, we could look at creating parking areas away from the venue and using shuttle buses to bring in people, as is the case in other parts of the world,” said Davis. “Once the parking area is close by and secure, it should work well.”

Davis and Silvera agreed that based on what it has to offer in terms of hotel rooms, lovely beaches and other attraction, Montego Bay is tailor-made for Reggae Sumfest, which brings significant economic benefits to the resort city.

“Just about everybody ... benefits from Sumfest. This year, the restaurants did exceptionally well; they never had enough hands to feed the people. The street vendors are saying they have never had it as good as this year,” said Silvera. “We had so many people being employed in different areas. In security alone, over 100 persons were employed and then you had a large number of persons who were employed to build out the infrastructure at the venue.”

Davis believes that like some promoters in the past have found out, taking the festival away from Montego Bay could prove to be a costly mistake.

“This Montego Bay venue has something that I don’t believe any other venue can offer. You have the international airport right there, it is close to the hotel rooms, and there are the special characteristics such as the friendliness of the people,” said Davis.

“Montego Bay can accommodate up to 6,000 visitors and it should be noted that for many of the visitors, especially those from the diaspora, it is much more than the festival, it is an opportunity to come to Montego Bay to enjoy the lovely beach, the nice hotel rooms and the party venues,” said Davis. “Montego Bay offers the kind of experience you are unlike to encounter anywhere else.”

Silvera expressed hope that going forward, patrons at Sumfest would not encounter the kind of congestion which was seen recently, which caused the St James Fire Department to consider the venue overcrowded and unsafe.

“Based on the experience some people had this year, I would support any effort for expansion because I would not like to see a similar situation in the future,” she said.