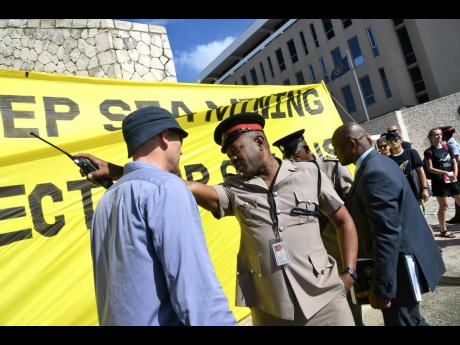 Rudolph Brown/Photographer
Inspector Phillip Smith (second left) speaks to Frank Hewetson (left), Greenpeace International coordinator, as they police yesterday tried to get the environmental activists to relocate from the entrance of the Jamaica Conference Centre in downtown Kingston, where the International Seabed Authority (ISA) annual meeting was under way. The Jamaica Environment Trust and representatives of other civil society groups also joined the protest against deep-sea mining.

Yesterday’s peaceful demonstration by Greenpeace International outside the Jamaica Conference Centre (JCC) in downtown Kingston drew more protest from the police and security personnel than the target audience. Having served notice of their intention for a peaceful protest, the activists of the international non-governmental environmental organisation turned up about 8:30 a.m. with a banner declaring ‘No to deep sea mining. Protect our oceans’.

The activists, who sailed into the Kingston Harbour on The Esperanza minutes before, were met by a high-level police delegation, led by Deputy Superintendent of Police Alton Spencer, operations manager for the Kingston East Police Division. As the Greenpeace team set up in front of the JCC, he accosted them and declared that they would not be allowed to continue their demonstration directly in front of or adjacent to the building.

What ensued was a running verbal battle with Greenpeace International coordinator Frank Hewetson.

Spencer: “You are going to obey the instruction of the police or the demonstration or whatever ... .”

Hewetson: “We just want to exercise our right of peaceful assembly … .”

Spencer: When you move, then we can talk. We are not opposed to your assembly, but not on this side. ...”

Hewetson: “And I want to stress that we will obey the police, but we are going to exercise our constitutional rights.”

Hewetson then pleaded to be allowed to pass a leaflet to delegates attending the 25th Session of the International Seabed Authority, which opened on Monday and runs until Friday, with some 72 nations represented.

“If the persons can come across [the road] and collect the leaflets, fine. Any assistance you need we are here to provide it.”

Spencer: “You are not going to be allowed over here, sir. That’s conflict.”

Hewetson: “That’s not conflict. That’s peaceful assembly. If I disobey you, it would be conflict, but I am not here to fight with the Jamaican police authority in any way at all.”

By that time, the banner had been held in place across the road by the group of about 15 Greenpeace activists. Delegates to the conference, who disembarked at the JCC gates, used their phones to snap pictures.

“I am not even certain what their mission is but we are here to basically ensure that there is no blockage,” Spencer told The Gleaner afterwards. “[We are here to ensure] nobody is impeded in terms of movement and we are protecting the interest of those persons who are attending the conference.”