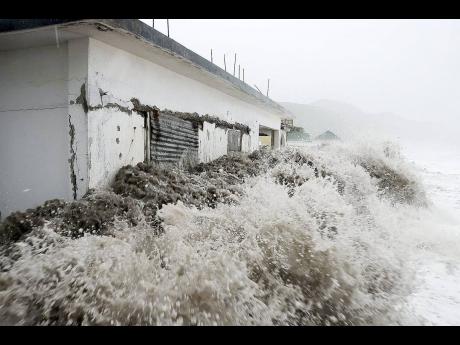 File
Ferocious waves crash violently against an abandoned house in Caribbean Terrace in St Andrew as Hurricane Sandy approached the island in October 2012.

The devastating impact of hurricanes on low-lying coastal areas could be drastically reduced if a storm surge prediction tool developed by a local researcher comes on stream.

Canute Ricketts, director of the Research and Mapping Unit at the Mines and Geology Division in the Ministry of Transport and Mining, said the tool, which can help Jamaica better prepare for hurricanes, was developed in 2017.

He was speaking yesterday at the second international conference on disaster risk reduction in the Caribbean, held at the Mines and Geology Division.

Ricketts embarked on the research after recognising that the forecasting techniques for storm surges were not accurate. Added to that, Jamaica stands a 63 per cent chance of being impacted by a hurricane in any given year.

The system was tested using data collected from Caribbean Terrace, a St Andrew housing community that suffered severe structural damage between 2004 and 2012 from hurricanes Ivan, Dean, and Sandy.

Ricketts compared measurements taken by the Meteorological Service after the weather systems with his calculated figures, using the model to test its accuracy, and it showed a 23 per cent difference. He concluded that his prediction overstated the impact of Ivan and underestimated Sandy and Dean.

“Since then, we haven’t had any major storms that have impacted the island for us to really use it to test it ... . It is one that we have to calibrate further in order to get it to the level of accuracy that would be required to use it for any major surge forecasting,” he said.

Ricketts said the Saffir-Simpson system – used to measure and categorise hurricanes from 1 to 5 – is limited as it is only able to indicate wind speeds.

“That’s why [the United States] had some real issues with Hurricane Katrina because that was a Category 3 hurricane, but it produced surges that were in excess of or within the range of a Category 5 just because of the size of the hurricane,” Ricketts explained.

“Once we are able to forecast and determine what areas are more prone to storm surges, we would then be able to plan the coastal environment better ... . This is also something that can be used in the development-approval process, and so we could assess what kind of development we’re putting up in an area,” he said.

Ricketts added that the once-upscale Caribbean Terrace, which has been largely abandoned since due to the impact of these weather systems on the community – could become fully habitable again depending on the vision for the area. He said a system that allows for the beach to be replenished and that would also give residents access to the beach would be better than the proposed sea wall.

“For the area to be reused for residential purposes, and if you want a recreational beach, I personally would go for a break-water system,” Ricketts suggested.