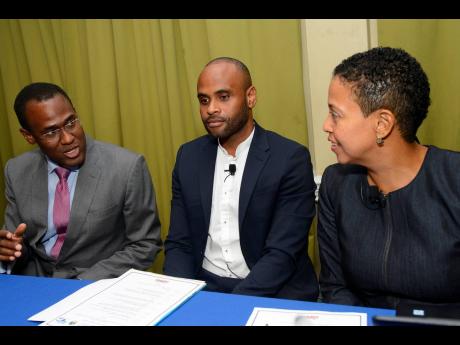 Finance Minister Dr Nigel Clarke has declared that Jamaica’s arrears are in the best condition ever.

Speaking to stakeholders on Tuesday at the 2019 procurement seminar at the Knutsford Court Hotel in New Kingston, Clarke assured micro, small and medium-sized enterprises (MSMEs) that the Government is now able to pay bills for services as soon as they come in, so there should be no payment-delay fear in doing business with the Government.

A recent scenario was put to the minister, where the principal of an MSME had been lamenting that his business could be shuttered soon, having had to borrow money because the payment arrangement was not honoured by a government ministry to which he had rendered goods and services.

In response, Clarke said he had read the article and said that the Government would be accommodating MSMEs as best as possible, making timely payments in accordance with agreed terms.

Clarke said that this was important because by definition, MSMEs are not necessarily sitting on wads of cash.

“Let me say this: The Government of Jamaica arrears are in better condition than they have ever been in, pick a time period, 25 years, 30 years,” the finance minister said. “You would have seen last year that we repaid 100 per cent of our arrears to JPS (the Jamaica Public Service Company). Up until that point in time, your Government, the Government of Jamaica – and by Government, I mean permanent-entity government – would have been carrying arrears of up to 13 months with JPS. Last year, we brought the arrears down to zero by paying $7 billion to JPS.

“One of the commitments we have in our economic reform programme is that our domestic arrears do not go up. They can only go down. And that is the commitment I can give to you. As minister of finance, I don’t manage the individual payment ... . What I manage is the aggregate, and what I can give you the commitment on is that the aggregate amount that we owe to suppliers will not increase from me. It will only decrease,” he added, pointing out that the arrears have been declining year on year.

The new public-procurement regime, which should enhance the potential for MSMEs to compete for larger shares of government contracts, took effect on April 1, 2019.

The new regime will allow for ‘set-asides’, which is reserving a portion of the annual procurement budget for MSMEs, and domestic margins of preference, which is the preferential treatment of Jamaican suppliers in accessing government contracts in specific circumstances.