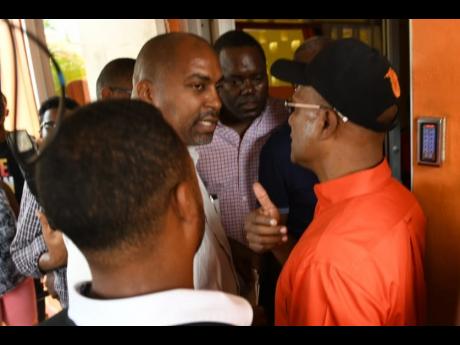 Bunting flocked by hundreds of his 'Rise United' supporters was the first candidate to be nominated.

Brown Burke’s endorsement for Bunting further divides the powerful PNP region three which is split between the two contenders.

Her declaration is significant if her endorsement reflects the preference of the organisation in her constituency, since St Andrew South West is among the constituencies with the largest number of party delegates.

Already, two of her councillors, Eugene Kelly of the Whitfield Town division and Payne Land division’s Audrey Smith Facey have declared that they are supporting Bunting.

There was much fanfare as both Phillips and Bunting went to be nominated.

Phillips’ supporters shouted “One Peter, one leader!” as music blared from marching band.

Bunting's backers also danced to the rhythms of a marching and chanted in support of him.

Supporters of incumbent @JamaicaPNP president @DrPeterPhillips chant: "One leader, one Peter" as they head to the party's headquarters for his nomination. Phillips is being challenged by Manchester Central MP @PeterBuntingMP. pic.twitter.com/b0GR4P9c1l

*NOTE: An earlier version of this story had said Victor Wright is standing with Dr Peter Phillips. Wright has written to say he has not declared a preference in the current presidential campaign.