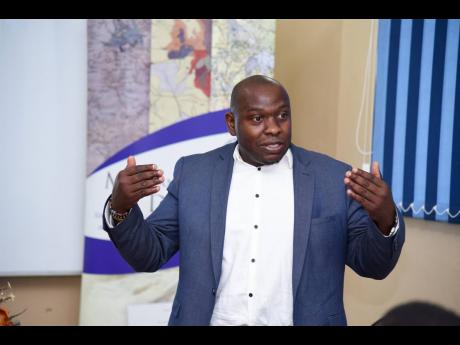 A United Kingdom-based geoscientist is asserting that too few Jamaicans have insurance coverage for property damage in the event of a natural disaster.

Speaking at the second international conference on disaster-risk reduction in the Caribbean at the Mines and Geology Division on Wednesday, Dr Servel Miller emphasised that insurance was the most powerful tool to give a financial cushion in the event of sudden losses.

“Unfortunately, in countries like Jamaica, for example, a middle income country, the take-up of insurance is not that great. It’s around 10 to 14 per cent and, as such, recovery is challenging,” he said.

Miller stressed that insurance was a vital risk-transfer tool to ensure that recovery funds are readily available.

“Risk transfer a lot of times in Jamaica is family [or] it’s your neighbour who helps you out ... [or] international donors, and most of that is not a sustainable mechanism,” Miller explained.

According to an Access to Insurance Initiative 2014 report, which looked at how Jamaica handled risk transfer, more than 60 per cent of recovery spending was funded by personal savings.

Although insurance is not always accessible or affordable, the geoscientist said the low take-up rate could also be the result of other factors.

“Some people choose to self-insure, put the money under the bed mattress in case, and it goes back to the savings. Then there’s the person who has the perception that ‘a government responsibility’,” he said.

Miller said that an over-reliance on the Government for the recovery process is not sustainable or practical.

“They don’t have a good history … . You saw the figures – two per cent,” he said, adding that some Jamaicans are taking too many chances.

“I’ve done some work in Caribbean Terrace, and you go there and they say, ‘Mi live here fi 40 years’ before they got the first storm. ‘Wi never get hit, why are we gonna move or put any measures in place?’” he said they asked.

Caribbean Terrace took a severe pounding from hurricanes Dean, Ivan and Sandy between 2004 and 2012.

The Natural Hazard Management Programme leader suggested that a diversification of Jamaica’s insurance sector is needed.

Miller explained that these policies would serve as prerequisites to such an insurance scheme.

Miller used Haiti’s 2010 and New Zealand’s 2011 earthquakes, which were of a similar magnitude, to illustrate the point.

For Haiti, “The economic loss was $8 billion, insured loss only $200 million. Compared to New Zealand, which recovered mostly, the loss was $24 billion, but almost all of that was insured,” he pointed out.

She said that areas less resilient to floods can be helped by property-level protection, which begins with the installation of stand-alone barriers, a helpful flood-defence tool.

Bhattacharya-Mis said that developing countries should aim to improve flood cover under household insurance policies and went on to explain that there are other losses associated with disasters.

“Damage is not always about the physical damage. There are lots of intangible damage that often happens after a flood,” she said.

Bhattacharya-Mis pointed out that some people may suffer from ill health, fear of further flooding, and stress. She concluded that while insurance may not cover these intangible losses, it could reduce anxiety about the future.

The conference was organised by the University of Chester in the United Kingdom with the support of the Mines and Geology Division in the Ministry of Transport and Mining.