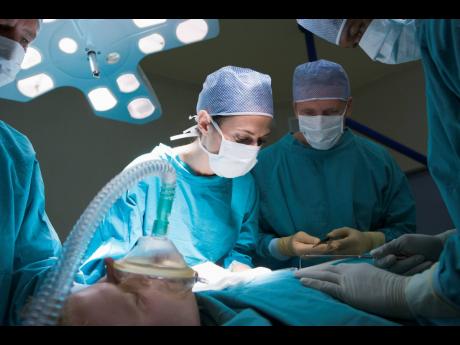 Doctors have been forced to use their personal headlights to perform surgeries.

Doctors at the Kingston Public Hospital (KPH) have been working in one of the main operating theatres without proper lighting for the last three years, but the chief administrator of the public health facility insists that the requisite light has been procured and just needs to be installed.

President of the Jamaica Medical Doctors’ Association (JMDA), Dr Elon Thompson, told The Sunday Gleaner that doctors have been complaining about the need to replace the light in operating theatre three for quite some time but, to date, it has not been replaced.

“They have told me that they have procured the light for operating theatre three, they told me that it is in the island, so it will be installed soon,” he said before adding, “but this is the kind of response we usually get from the Ministry of Health and officials.”

However, Colleen Wright, chief executive officer at the Type A hospital, confirmed that the required light for operating room three had, in fact, been procured, and the procurement process had started to get a light to replace the non-functioning one in operating theatre four.

“For operating theatre three, the light is here in the island. It has been procured and it will be installed shortly. There are some provisional works that need to be done before the installation, but it is going to be installed shortly,” she assured The Sunday Gleaner.

In the meantime, the JMDA president said doctors have been forced to use their personal headlights to perform surgeries. At one point, the hospital had borrowed a spotlight from another hospital, but that has since been returned.

“There are operations now that occur in that same operating room (three) that are taking place, and the surgeons are the ones who bring their equipment. We have told administration multiple times that the surgeons, myself included, would like to stop bringing our equipment,” said a frustrated Thompson, who noted that the doctors sometimes had to bring their own scrubs.

“The headlights are not ideal, because they only give you a limited scope and they are most times battery-operated, although you can plug them in and you can recharge the batteries. But from a dependable standpoint, you may have issues, so you don’t want to be depending on it too often. It is sometimes uncomfortable to wear, so some persons really don’t like the headlights because it gives them migraines.”

Thompson added, “These are just not adequate for operating on people who have medical conditions. It is not appropriate. The theatres need to be outfitted with World Health Organization standardised operating room lights that need to be functional and be used for all patient procedures that require it. We need to stop fooling ourselves.”