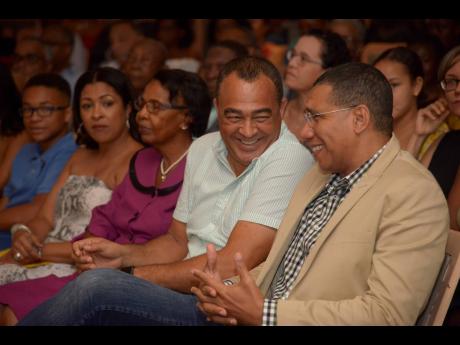 Shorn Hector
Dr Christopher Tufton (second right), minister of health and wellness, with Prime Minister Andrew Holness at the launch of his book ‘State of Mind: Politics, Uncertainty and the Search for the Jamaican Dream’, at the Institute of Jamaica in downtown Kingston on Sunday. Also in photo (from left) are his son, Adam; wife, Neadeane; and aunt, Annette Spencer. See related story on Page B6.

Court of Appeal Judge Nicole Foster-Pusey sat in the audience at the Institute of Jamaica yesterday listening to the man with whom she shared leadership responsibilities as head students at the Manchester High School in 1986, and she left inspired.

Dr Christopher Tufton, the minister of health and wellness, had invited her to be part of an intimate gathering for the launch of his book, State of Mind: Politics, Uncertainty and the Search for the Jamaican Dream.

Tufton has announced that the proceeds from the book sales will go to his alma mater.

“I’m very happy about it, and it actually makes me look within myself now to say I should do something too, and I certainly encourage other Manchester High School graduates who can attest to the developmental impact of the school to really make an effort and contribute in whatever way we can,” said Foster-Pusey.

Tufton has dedicated the book to the Manchester High School and his late mother, which he described as the two “most powerful influences” in his life.

He began writing the book after what he described as his first major political loss in 2011, losing his St Elizabeth south west constituency by 13 votes to the People’s National Party’s Hugh Buchanan.

“I found myself with a lot of time on my hands ... my initial intent was to reflect on the journey from my political awakening, early years of high school through to my first major political setback ... . I had the perfect opportunity to pursue this reflection,” he said.

Tufton said he thought it would take him a year but instead it took seven to produce the 38-chapter book. He went on to declare that there are elements of the book that will be criticised but his hope is that it will generate dialogue.

“This project has been long in gestation. I’m glad it’s at the point where we can make it available. I say read with an open mind, with a critical mind, and as the title suggests, and the conclusion, you will see, your destiny starts with your state of mind,” Tufton said.