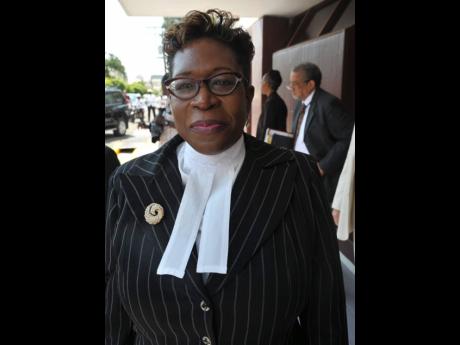 The Kingston pastor who repeatedly had sex with a then 12-year-old girl whom he impregnated was never indicted for rape, Jamaica’s chief prosecutor, Paula Llewellyn, has revealed.

Further, Llewellyn disclosed that her office did not have sufficient evidence to mount a viable case against Kenneth Blake, pastor of Harvest Temple Apostolic Church, for the offence of forcible abduction.

“The ingredient that comprised forcible abduction was not made out, so it was not charged on the indictment,” she told The Gleaner yesterday.

Blake, 56, was arrested by detectives from the Centre for the Investigation of Sexual Offences and Child Abuse in August 2017 and charged with rape, forcible abduction, grievous sexual assault, having sex with a person under 16 years old, and sexual touching.

He spent nearly two years denying the accusations until yesterday, when he pleaded guilty to two counts of having sex with a person under 16 years old and one count of sexual touching in the Home Circuit Court.

He is to be sentenced on October 18 and has been remanded.

His then 12-year-old victim was the daughter of one of his parishioners to whom he was engaged to be married, investigators said. The now 15-year-old gave birth to a boy on November 30, 2017.

But following the guilty plea, there were questions about the decision taken by prosecutors to omit the rape charge.

Llewellyn, the director of public prosecutions, explained that the offence of having sex with a person under 16 is easier to prove as “consent would not be an issue”. In addition, she pointed to the Sexual Offences Act, which provides a penalty of life in prison where an “adult in authority” is convicted for the offence.

“If the situation presented is borderline, you find that when you are dealing with a child, the ingredients are easier to prove,” she reasoned.

The Gleaner first reported that Blake was arrested and charged after the teen gave investigators a detailed statement in which she complained that Blake had sex with her at his St Andrew home when she was just 12 years old.

She told investigators that Blake first had sex with her in 2015.

That, she said, happened after the clergyman gave her older sister money to go downtown and “buy some things” before forcing himself on to her.

However, everything came to light in August 2017 after she discovered that she was pregnant and confessed to her mother.

He insisted in court that the accusations against him were part of an extortion attempt by the child’s mother and volunteered to do the first DNA test.