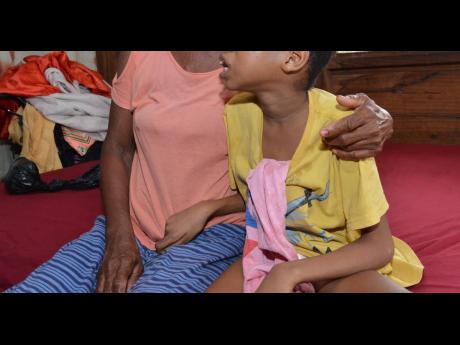 Kenyon Hemans/Photogrpaher
Sixteen-year-old Peter-John is embraced his grandmother as she details her stuggle finding a state facility ti care for him. A political representative in St Elizabeth has said that Peter-John, who has a severe case of cerebral palsy, is not likely to find a space until a state ward dies. 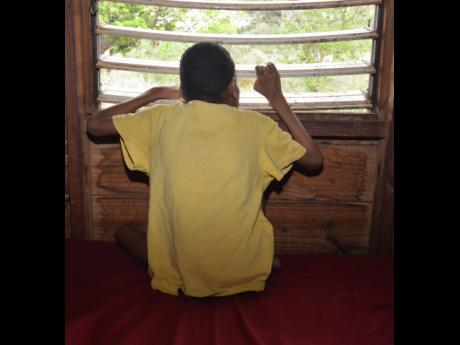 Kenyon Hemans/Photographer
Peter-John looks out the window at his Newcombe Valley home during a Gleaner visit recently.A political representative in St Elizabeth has said that Peter-John, who has a severe case of cerebral palsy, is not likely to find a space until a state ward dies.
1
2

Imagine being told that in order for your 16-year-old nephew, who has a severe case of cerebral palsy and who you are no longer able to care for, can only be accommodated at a state-run facility if a ward of the state dies.

This is the reality for Sarah Johnson*, who lives and works in Montego Bay, St James. She is originally from Newcombe Valley in St Elizabeth, where she was forced to take her nephew, Peter-John*, to be cared for by her ailing mother – his grandmother – as she had neither the time nor resources to adequately look after him.

But her mother, 61-year-old Janet Morgan*, is in no better situation, and after 10 years of trying her best to care for her grandson – who she loves “with all my heart” – she is now pleading with the authorities to take him off her hands.

“I feel he will better cared for in a government institution because I just don’t have it and I am a sick woman,” Morgan told The Gleaner, which visited her at her modest one-bedroom board house in Newcombe Valley. The news team was greeted by a hyperactive child, who looked more like a five-year-old than a teenager.

The severity of the cerebral palsy makes Peter-John only able to stand for brief moments while holding on to the rails of the verandah. He has never walked.

His aunt lamented that Peter-John has never benefited from any serious intervention – whether from the State or otherwise – to help improve his condition.

“To my knowledge, he never had physiotherapy done and the doctors say the nerves in his legs are weak,” Johnson said.

She shared that the family has made efforts to have her nephew placed in an institution. They even tried the Sir John Golding Rehabilitation Centre in Mona, St Andrew, but were unsuccessful. When they approached a political representative in St Elizabeth for assistance in getting Peter-John into a state home in Santa Cruz, his response was disappointing.

“He told me that he did not mean to sound heartless, but he said that in order for him to get in, somebody would have to die,” Johnson recounted.

And she said persons from the relevant child agencies were only concerned about whether the living conditions were suitable enough for Peter-John and not whether his ill grandmother was well enough to also take care of him.

“I love him, but I just can’t manage to care of him anymore,” Morgan pleaded as The Gleaner wrapped up the interview.

What was immediately obvious was that Thompson, who is non-verbal, is well aware of his surroundings. While he cannot stand, he moves fairly quickly on his buttocks and has to be watched constantly so he does not fall off the bed and hurt himself.

He gesticulated and made sounds during the interview and made efforts to take away the camera from our photographer.

Johnson had earlier explained that her brother, Peter-John’s father, died 10 years ago from a brain tumour. The child’s mother then took him to her house and left him there.

Having to work and with children of her own to take care of, it was a challenging experience. That was when she took her nephew to her mother in St Elizabeth, who has tried her best to provide care for him since then.

However, the frail woman, who told The Gleaner that she suffers from hypertension, diabetes, high cholesterol, as well as a kidney ailment, can now barely find food for herself much less her grandson.

“Him eat around di clock and him need nuff [diapers] and mi can’t afford it,” Morgan said, adding that she has two hernias requiring surgery which she can’t address while Peter-John is in her care.

Morgan said she and her grandson receive between $6,500 and $7,500 every two months under the Programme of Advancement Through Health and Education (PATH), but that amount is woefully inadequate.

She admits that as a PATH beneficiary, Peter-John is seen at the clinic and his prescriptions are filled free of cost at the DrugServ facilities. However, he constantly needs medication as he suffers from seizures and oftentimes the medication is not available at DrugServ dispensaries.

“Is through the mercy of God and kind-hearted people why we survive. I am not going to lie. The church people help wi sometimes and other people wi give wi a $500 or a $1,000 from time to time,” Morgan shared, as she made a plea to the Government to do more to assist families with disabled and special-needs children.