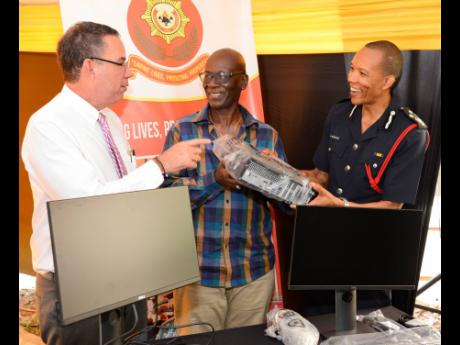 Ian Allen/Photographer
Daryl Vaz (left), minister without portfolio with responsibility for land, environment, climate change and investment in the Ministry of Economic Growth and Job Creation; and Local Government and Community Development Minister Desmond McKenzie hand over computers to Jamaica Fire Brigade Commissioner Stewart Beckford yesterday. The computers are to be used to establish a bush fire warning index.

Jamaica Agricultural Society (JAS) President Lenworth Fulton is insisting that a greater public-education push is needed to shore up efforts to combat bush fires which have been threatening the livelihood of several farmers.

He was speaking yesterday as he reacted to news that the Ministry of Local Government and Community Development had handed over 33 computers to the Jamaica Fire Brigade (JFB) as part of the ongoing efforts to boost the infrastructure of the agency.

Fulton, who told The Gleaner that he was unaware of the handover, applauded the move.

“I want to congratulate them for doing what they are doing. It’s a good move, but while we need the computers, more information should be given to stakeholders,” he said.

JFB Commissioner Stewart Beckford told The Gleaner at the handover ceremony that the country has seen more than 1,300 bush fires since the start of the year.

And according to Fulton, farmers have been racking up huge losses.

“Agriculture has been significantly affected with massive losses running in the millions and millions. From grass to coffee and other permanent crops – mangoes, ackee, coconut – have registered significant losses through bush fires,” he said. “There is a lack of public education of the signs to look for and farmers’ behavioural practices. A farmer will go to his bush and cook ‘cause they have no restaurants there. We should do much more and study quick-fix and common-sense methods [for fires that get out of control].”

Fulton noted that much attention is placed on homes and businesses in relation to fires and urged that a similar push be made to raise awareness on bus fires.

At yesterday’s ceremony, government minister Daryl Vaz thanked the Caribbean Development Bank for “making the funds available for this initiative and we look forward to the fulfilment of the project's objectives over the next few months”.

He added: “The computers will have special software that will allow for effective database management and will also be supported with the global positioning system units that will assist with providing identification of these bush fire locations.”

Vaz also said the Met Service would be designing a warning index, which will act as a predictive tool to encourage pre-emptive action and prevent some of the fires from destroying forests, farms and the livelihood of families across Jamaica.

“We are seeing bush fires in many parishes now where there were no programmes of public education before by the JFB and ... it’s gonna be critical that the public education campaign about disaster as it relates to bush fire be upgraded so that we can send this message right across the entire island because the entire Jamaica is suffering from this change in our climate,” Local Government Minister Desmond McKenzie said.