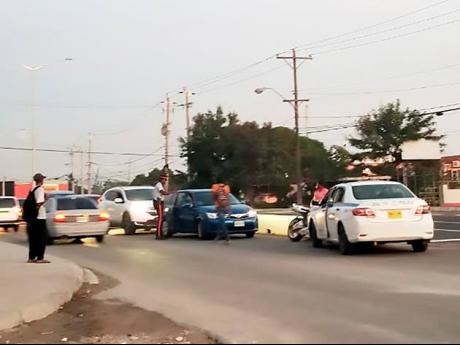 A traffic change at the intersection of Constant Spring and Grants Pen roads in St Andrew has been a source of major pain for some motorists unaware of the new arrangements.

The National Works Agency issued a media release on Monday afternoon saying that effective immediately, no right turns would be allowed from Grants Pen Road on to Constant Spring Road as improvement work continues on the busy corridor.

Despite this, no road signs were posted notifying motorists of the change, with some being issued with traffic tickets for making right turns amid the confusion. They decried the manner in which the situation was handled and lamented that it was unfair to issue tickets for the breach as they had not been informed of the traffic change.

“I am driving like I normally drive and here comes the police, pull mi over, asking me which side of the road people drive on in Jamaica,” one frustrated motorist told The Gleaner on Monday. “Is months now I turning right from Grants Pen Road on to Constant Spring Road as I live in the Constant Spring area. People are driving on these newly constructed roadways on autopilot. Are motorists to drive on the road today, then later when you going home don’t drive on it? Pure confusion!”

He added: “Where is the sign that I should no longer drive there? When was the roadways opened?”

Although he was warned and not ticketed for the offence, other motorists were not so lucky. He said a relative of his was penalised by cops on the weekend.

Up to Monday evening when The Gleaner visited the intersection, there were no visible signs.

However, she said that a worker had advised her that a temporary sign had been placed. The Gleaner observed a sign when we passed by the area yesterday.

“I was told by the engineer that there is a sign up – a sign that says no right turn. Generally, road changes and signs come from the NWA. We put signs where they instruct us,” she said.

The confusion had resulted from motorists being restricted from driving on different sides of the road during the project, with both sides now being opened without the relevant advisory.

“There is a temporary sign up now. There will be a more permanent one in place when the roadwork is completed,” Anderson added.

“Motorists seeking to travel north from Grants Pen Road towards Manor Park must turn left on to Constant Spring Road, travel south towards Shortwood Road, then use the traffic lights there to turn around and enter the northbound carriageway,” he advised.

The NWA has cautioned motorists against attempting to use the southbound lanes to travel north as it was not only dangerous but illegal.

Works continue on other sections of the road rehabilitation project with a month to go before completion deadline.