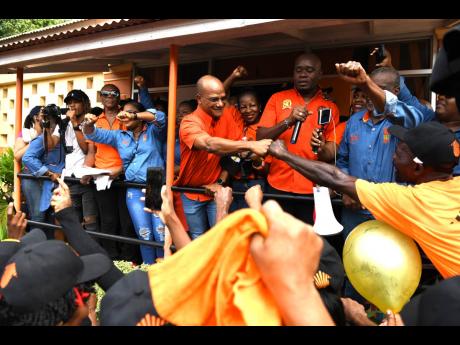 The Rise United team of People’s National Party (PNP) leadership challenger Peter Bunting is now ahead with member of parliament support, according to The Gleaner’s weekly on-the-ground tracking ahead of the September 7 presidential polls.

Members of Parliament Dr Angela Brown Burke and Noel Arscott have joined the Bunting team, sending the number of MPs in Bunting’s camp to 11 while the One PNP team led by incumbent Dr Peter Philips has nine parliamentary backers.

“Comrade Brown Burke is a seasoned campaigner of internal elections, having played an important role in Portia Simpson Miller’s successful campaigns,” Bunting told The Gleaner. “In many ways, she is a torch bearer of Portia’s legacy. She has consistently advocated for the poor and for women [both] in the party and nationally.”

Brown Burke succeeded Simpson Miller as MP for St Andrew South West in 2017. The constituency has the third-highest number of delegates (105) of the 63 constituencies islandwide.

“Angela’s experience and credibility will be invaluable to the Rise United campaign going forward,” Bunting said of the former PNP vice-president.

Her declared support for the Rise Team camp sent political ripples not only through the party, but also through her household, with a scathing 14-page letter written by her husband, former PNP General Secretary Paul Burke, coming to light. Burke lamented that she had led him to believe that she would be backing Phillips’ candidacy.

Brown Burke, a former mayor of Kingston and St Andrew, served multiple terms as councillor for the Norman Gardens Division in the constituency of Kingston Eastern and Port Royal, which is represented by Phillip Paulwell.

Paulwell, however, was among the first MPs to declare support for Phillips.

Meanwhile, Arscott, the MP for Clarendon South West, has for weeks remained in the undecided/unknown category. However, he was digitally captured last week attending a Bunting soirée and has been attending activities put on by the Rise United team.

The Clarendon South West constituency he represents has 74 delegates.