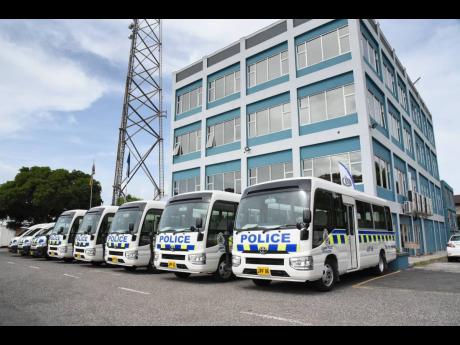 The Jamaica Police Federation is now breathing a sigh of relief following years of negotiation as they were yesterday outfitted with eight motor vehicles – five Toyota Coasters and three Toyota Hiace buses – to transport police officers to and from duty.

“We had a rough negotiation, where you had two previous chairmen, then I was the third chairman who led that negotiation. We initially asked for five 30-seaters and three 15-seaters in the 2017-2019 heads of agreement. That was a seal deal, the five 30-seaters that we requested and the three 15-seater buses were handed over by the commissioner of police. The new chairman and the rest of the executive, including myself, were part of the handover process and these buses will be serving St James, St Catherine, and Kingston,” McBean, who is now director of research and documentation for the federation, told The Gleaner.

McBean said that the federation was dedicating the symbolic move to slain cop Crystal Thomas, who was killed by gunmen attempting to rob passengers on a public passenger bus in July 2015. Thomas had left work at the Denham Town Police Station and boarded the Coaster bus, which was commandeered by gunmen moments afterwards just metres from the station. They shot her three times in the face after she tried to foil the robbery attempt.

“It is so dangerous for our members to be travelling on public transportation knowing that they have gone through the process of serving, protecting, reassuring citizens of Jamaica and even trying to curb crime, then you are on the bus with the very same criminal. It poses a major risk and we have to try as a Police Federation to ensure that it’s not about just ... negotiating for salaries, but the general welfare and well-being of our members,” McBean added.

The buses were procured for just over $65 million.