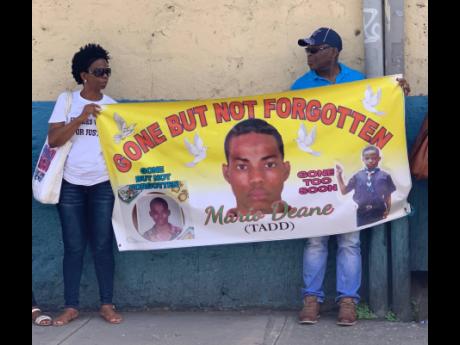 Adrian Frater
Mercia Fraser (left) holding a banner with a portrait of her son, Mario DeaneAT LEFT: A protester calls for justice for Mario Deane five years after his death. 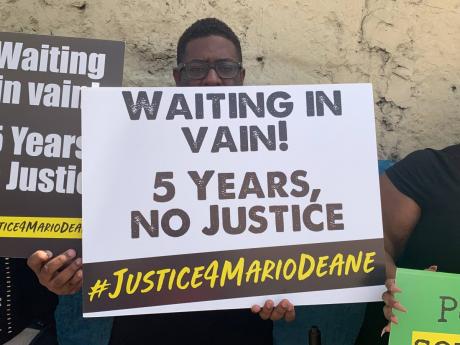 Adrian Frater
AT LEFT: Protesters calling for justice for Mario Deane five years after his death. 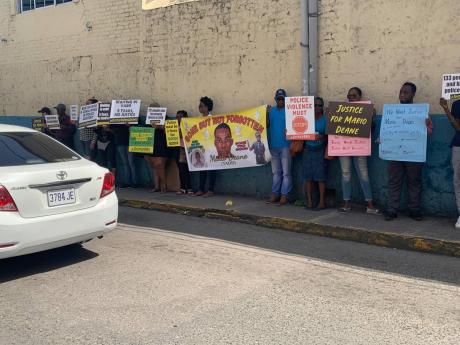 As she has been doing for the past five years, Mercia Fraser – whose son Mario Deane died on Independence Day 2014, three days after a brutal beating at the Barnett Street Police Station in Montego Bay, St James – marked the anniversary of his death with a protest outside the police station.

“I am frustrated with the long time it is taking to get justice for my son, but I am not giving up,” said Fraser, who was supported by representatives from Jamaicans for Justice (JFJ), friends and well-wishers in her bold three-hour vigil.

“This is about keeping the promise I made to my son as I sat at his bedside watching him die.”

Since the incident, which attracted local and international attention and sparked legislative changes in the use of ganja, Fraser has been unrelenting in seeking justice for her son, who was arrested by the police after he was found with a ganja spliff. He was 31 years old at the time of his death.

Three police officers and three inmates, who reportedly were sharing a jail cell with Deane when he was beaten, were charged in connection with his death. The case is still ongoing in the courts but is being plagued by numerous procedural delays.

“It has been a long wait for justice and I believe it is unfair to all concerned, including the police officer who has had to be attending court since 2014,” said Fraser, who had taken her bid for justice to as far away as the Inter-American Commission on Human Rights in Uruguay in 2017.

Despite the significant cost to travel from her home in Hanover to St James each time the case is called up in court, the heartbroken mother has never missed a single sitting.

Monique Long, policy and advocacy manager at the JFJ, said that her organisation had decided to join the protest as a show of solidarity to Fraser, as they, too, have a vested interest in ensuring that justice is served.

“Being out here is a show of solidarity with Mercia. She lost her son over five years ago and it is for us to come together as persons who have a vested interest in the movement of justice and persons who care about how the case progresses,” said Long.

Like Fraser, Long also expressed frustration with the length of time the case is taking to arrive at a resolution through the court system.

“We think one of the important parts of a justice system that works is a system that works in a timely manner and a system that holds persons accountable. The fact that numerous delays have occurred puts off the accessibility of justice, and it makes it difficult in these instances for Mercia to feel that justice is being served for her son,” added Long.

The placard-bearing protesters, who were allowed to protest unimpeded due to the conspicuous absence of the police, got support from passers-by, including motorists who shouted out words of encouragement and honked their horns as they displayed their signs with messages such as, ‘Waiting in vain, 5 years no justice’ and ‘We need justice for Mario Deane’.

Like the Rastafarians, who suffered brutally at the hands of the State at that same facility in the aftermath of the 1963 Coral Gardens incident, the Barnett Street Police Station has become a symbol of brutality and injustice for Fraser and those who have joined her in pushing for justice for her son.