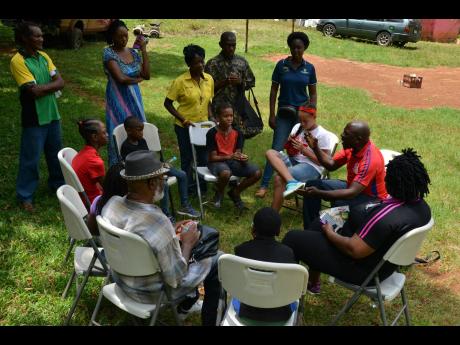 Kenyon Hemans
Robert Williams, a regional director at the Child Protection and Family Services Agency, speaks with residents from Sterling Castle Heights, St Andrew, during a therapeutic fun day hosted by the Peace Management Initiative and several other stakeholders at a football field in the community yesterday. 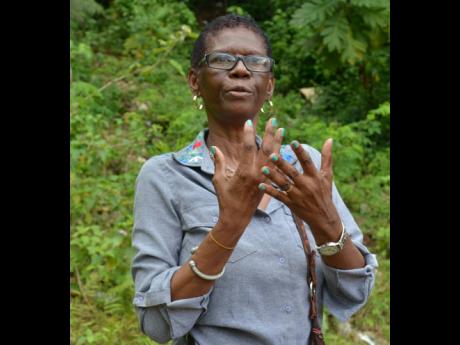 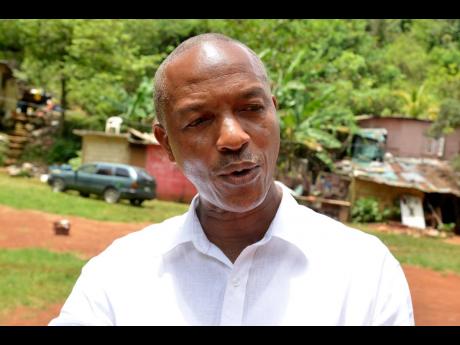 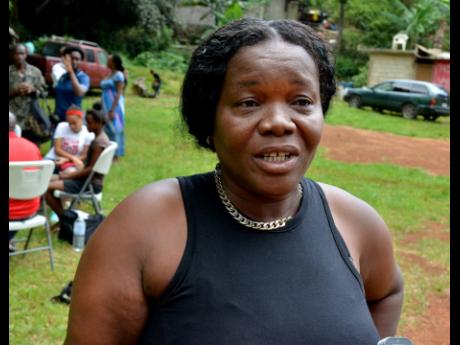 The fun and frolic expected from children during the summer has been absent in Sterling Castle Heights, St Andrew, where eight-year-old Shante Skyers’ body was found in April.

Despite the intervention of several non-governmental and state agencies since then, Robert Williams, a regional director at the Child Protection and Family Services Agency (CPFSA), said children in the community are still living in fear.

“What happened would have impeded their fun and joy this summer, because the children are saying that they are still afraid,” he told The Sunday Gleaner.

“That is sad, and we have to help them regain confidence in this community. All of us have to make sure that this community is safe again.”

Helping residents feel safe again was the focus of a therapeutic fun day hosted by the Peace Management Initiative (PMI) and several other stakeholders at a football field in the community yesterday.

Other groups lending support included the CPFSA, the Social Development Commission, the Red Hills Skills Training Centre, Women’s Centre of Jamaica Foundation, the Bureau of Gender Affairs, and representatives from the Programme of Advancement Through Health and Education (PATH). There were also medical practitioners on hand.

While residents are slowly opening up, they are still cautious, and so volunteer at the PMI, Coreen Ffrench, said her agency has been maintaining a presence in the community in an effort to build and maintain trust.

There has been widespread speculation that Skyers’ murderer is from the community, but the perpetrator has not yet been arrested.

The eight-year-old went missing on April 11 of this year, and her body was found five days later.

Following that, angry residents in the community mobbed and killed a man they blamed for her abduction and murder. However, her murder remains unsolved.

‘WE’RE HERE TO PROTECT YOU’

“You have to make sure you pull them out and say, ‘Look here, we are here to protect you, we are here to secure you, even for a day’, and that is why we planned to have this thing today, to let them socialise with the community,” Ffrench said, just minutes after returning from one of her recruitment drives in the community, which was aimed at getting residents to leave their houses for just a few minutes and have some fun.

She added, “They are saying that they don’t even want the children to come out, so we are having issues too, because we are wondering if they are going to be coming out today because they don’t want to mix with other persons.”

As she spoke, the representatives from the various agencies sat under a tent with pamphlets for distribution, but up to midday, there were hardly any takers.

Paul Messam, principal for the Red Hills Primary School, where Skyers attended before her brutal demise, said the children are still hurting despite the fact that they have benefited from as many as 10 counselling sessions since her death.

“Based on the sessions we have been having, we are still trying to cope at this point in time, because it was a wicked act,” said the principal.

…Where is the school bus that was promised? asks Sterling Castle mother

Novelett Morgan, a parent in the community of Sterling Castle Heights, St Andrew, believes that the purchase of a school bus would help to ease some of the anxiety currently being experienced by parents who live in fear for their children, following the murder of eight-year-old Shante Skyers in April.

“A lot of children from here go to Red Hills School and we were asking if they can just get a bus because my daughter used to walk there to school, too, where the little girl was murdered, but not on the same side, and eventually I had to stop her,” said the mother, whose two children attend the school.

Morgan, who has four children, added, “When I am going to work, I bring them and put them on a bus and the bus brings them to school and we pay $50 [for each], but when they are coming back from school, because I have to work, it is $600 right about now for them. I have to pay $3,000 now for the two of them [per week], just to reach home.”

“When the incident happened, they said they were going to give a bus to bring them to school and we would pay a little fee, but from the incident, we don’t hear anything,” she said.