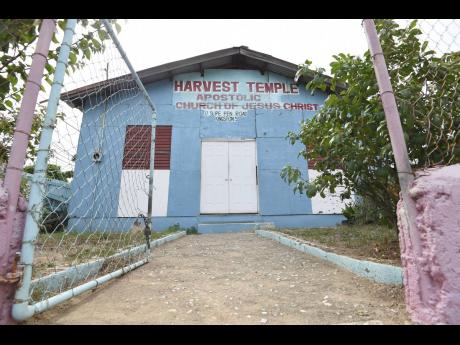 The Kingston-based Harvest Temple Apostolic Church has vowed to press on, declaring that it has nothing to be ashamed of as its disgraced pastor awaits sentencing on sex-related charges after impregnating a 12-year-old girl.

Last week, Pastor Kenneth Blake pleaded guilty to two counts of having sex with a person under 16 years old and one count of sexual touching in the Home Circuit Court. He had been denying the charges for two years, despite DNA tests revealing that there was a 99.9 per cent chance he was the father of the minor’s child.

At yesterday’s first Sunday service since the guilty plea, senior church leaders insisted that the pastor’s sins would not be the congregation’s shame.

“God doesn’t deal with wrong. If somebody is wrong, then they will receive their pay for what they do. I am free through the Son of God and there is no condemnation in Christ Jesus,” a female elder, who did not wish to be identified, told The Gleaner after yesterday’s service.

“What happened cannot affect the church, which is built on Jesus Christ. I am not afraid and I am not cast down because the church didn’t do anything wrong,” she added.

Pointing out that each man would have to answer for his wrongs committed on earth, the elder had this advice for members of the clergy: “ ... Live right and follow the commandments of Jesus Christ. As long as you follow the commandments, you shall live and not die. The gates of hell and the enemy shall not prevail. God will deliver us from enemies.

“I am not going to bow down my head in shame for I have nothing to be ashamed of,” she continued. “We leave everything in the hands of God because we can’t do anything.”

During yesterday’s service at the Slipe Pen Road church, a male preacher sought to enlighten worshippers on the strength of the devil, warning congregants to be careful.

“Don’t ramp with the devil. The devil takes the best of the best. It is unfortunate that a child of God could find himself in that place,” the preacher said.

Blake, who is now 56, was arrested by detectives from the Centre for the Investigation of Sexual Offences and Child Abuse in August 2017.

His then 12-year-old victim was the daughter of one of his parishioners to whom he was engaged to be married, investigators said. The now 15-year-old gave birth to a boy in November 2017.

He is to be sentenced on October 18.