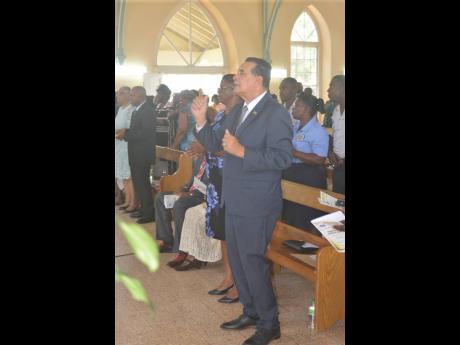 Speaking at yesterday’s Independence service at the Bethtephil Baptist Church in Chatham, St James, Davis noted that there has been a reduction in the murder rate in St James since the parish, along with Hanover and Westmoreland, was blanketed by an SOE on April 30.

“If I’m to look at the time when the SOE was lifted on January 31, and I look at the statistics during the three-month period in February, March and April, we had 43 murders committed in this space. But if we were to juxtapose that against May, June and July, in which there were 27 murders, I’m looking at a reduction of 16 murders,” said Davis.

“What that’s telling me is that 16 [more] persons are still alive today and it could be more. So let us, as citizens, embrace the SOE that worked exceedingly well for us last year, and I know it will work well for us this year,” Davis urged the gathering.

St James recorded 102 murders in 2018, down from 341 the previous year. The reduction was attributed to the parish’s SOE at the time, which was announced by Prime Minister Andrew Holness on January 18, 2018 and ended on January 31 this year.

Yesterday’s church service was being held as part of the parish’s celebration of the country’s 57th anniversary of Independence on August 6, under the ‘One Nation, One People’.

In his sermon, Pastor Rudolph Brooks called for unity among religious and political leaders in order to restore Jamaica’s sense of community.

“Religious and political leaders must break down fences ... in this the 57th year of our anniversary of Independence. We must shatter division and rise to the challenge to live together in unity,” he urged.

The service was attended by several civic and political leaders.