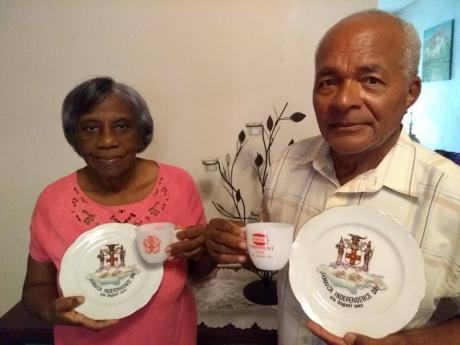 Contributed
Hilary Campbell and her husband, John, show off their precious Independence memorabilia.

The plates sit neatly on a buffet in the dining room. The cups occupy pride of place in a cabinet they have called home for the greater part of 57 years.

Hilary Campbell’s parents had received the memorabilia bearing the Jamaican coat of arms in 1962 when the island got its Independence from Britain. As their only child, the precious items were passed on to her.

“It reminds us of that time ... . I just have them here as souvenir and, every now and then, I look at them,” Campbell told The Gleaner.

Then 17 years old and a student of St Hugh’s High School in Kingston, she said the national anthem was taught in schools in preparation for Independence.

The big day, she said, was quite grand.

Reflecting on the August 6 events 57 years ago, she recalled that her family drove in her aunt’s vehicle from Kencot in St Andrew, where they lived, to the National Stadium to witness one of the most historic days in the nation’s history.

BIRTH OF A NATION

“There was a whole lot of celebration. They had street dances and then we went to the stadium ... . I remember the dignitaries as they came in – Princess Margaret, who represented The Queen, was there; and the governor, Sir Kenneth Blackburne, and his wife; ... and Sir Alexander Bustamante and the leader of the Opposition – could’ve been Norman Manley, I’m not certain,” she told The Gleaner.

The most momentous part of the celebrations, according to Campbell, was when the Union Jack was lowered and the Jamaican flag ascended the flagpole at midnight.

“Other families were screaming and so on, but my family was cheering,” said Campbell, adding that her family wasn’t big on screaming.

The excitement, however, was universal as the thousands of persons in the stadium celebrated the birth of the nation.

“There was a feeling of excitement, not that we really understood what difference it would make being independent as opposed to being under colonial rule,” Campbell said.

Her husband, John, described the events as spectacular.

“The night before, hardly anybody [went] to their bed because that was the excitement – the midnight stroke for Independence,” he chimed in.

Campbell plans to watch the annual Grand Gala from the comfort of her home today.

She added that it brings back memories of the first Independence celebrations, mainly because it is held at the same location.