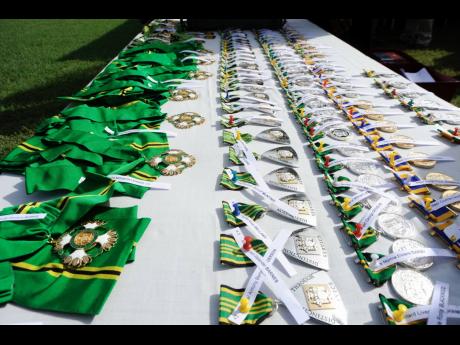 File
A selection of awards given out to Jamaicans and non-nationals who make significant contributions to the nation annually.

Tamar Blake, who raised an alarm when a woman tried to register a baby snatched from the Victoria Jubilee Hospital in January, is among more than 100 Jamaicans appointed to the various orders of societies of honour and given badges of honour this year.

Blake has been bestowed with the Badge of Honour for Gallantry for an act of courage and bravery in ensuring the safe return of an abducted infant, Sae’breon Hutton.

The newborn was stolen from the Kingston hospital on January 9, prompting a police manhunt for the baby snatcher and the infant.

Twenty-eight-year-old Peta-Gay Ffrench, who was caught when she attempted to register the child as her own at the Registrar General’s Department, last month pleaded guilty to child stealing.

Meanwhile, Gerald Lalor, former principal of The University of the West Indies, Mona, has been appointed to the Order of Merit for his eminent contribution to Jamaica and the world’s development through the application of science, technology and innovation and service to the public and private sectors.

He is the only recipient of this honour.

Julius Garvey, son of Jamaica’s first national hero, Marcus Garvey, has been appointed to the Order of Jamaica for his distinguished contribution in universal civil activism and promotion of entrepreneurship and the legacy of Garveyism and pan-Africanism.

Rita Marley has also been appointed to the Order of Jamaica for her outstanding contribution to the popularisation of Jamaican music and by extension, Brand Jamaica on the world stage and for humanitarian work through the Rita Marley Foundation.

National Security Minister Dr Horace Chang is among the honourees in the Order of Distinction in the rank of Commander. He is being saluted for distinguished public service in the area of politics. Dr D.K. Duncan and Dr Aundre Franklin are also being honoured for outstanding service to the Electoral Commission of Jamaica and Christopher Dehring for outstanding contribution to banking and finance, telecommunications and sports marketing.

The recipients will be formally recognised in a ceremony on National Heroes Day, October 21.