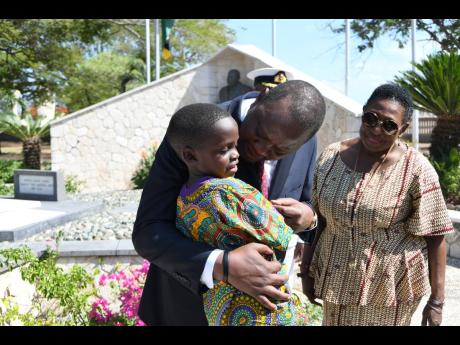 Rudolph Brown/Photographer
Uhuru Kenyatta, president of the Republic of Kenya, chats with Chavon Brown as Culture Minister Olivia Grange looks on at the floral tribute at shrine of National Hero Marcus Garvey at National Heroes Park in Kingston yesterday.

Under the sweltering heat of the morning sun at National Heroes Park in Kingston, a number of persons yesterday awaited the arrival of the president of the Republic of Kenya, Uhuru Kenyatta.

Moments after 9 a.m., the president’s motorcade drove through the park’s main entrance to the south and made its way to the centre of the park, stopping immediately before the gates leading to where Jamaica’s former prime ministers are buried and to the right of the Cenotaph, the monument erected in honour of the thousands of Jamaicans who died in World Wars I and II.

As he alighted from the vehicle, Kenyatta was greeted by Culture Minister Olivia Grange, who, along with other officials, then escorted him to the shrine of Jamaica’s first national hero, Marcus Mosiah Garvey, at the eastern end of the park.

In the background, Nyabinghi music massaged the air as a group of Rastafarians beat their drums with conviction.

At the shrine, Kenyatta was greeted by Steven Golding, president of the United Negro Improvement Association, which was founded by Garvey in 1914.

He was also greeted by Professor Carolyn Cooper, who, through her extensive work in cultural studies, caused the broader public to have an appreciation for Jamaican culture, especially as it relates to our language, reggae and dancehall music.

Accompanied by a member of the security forces clad in white ceremonial dress, Kenyatta entered the star-shaped shrine, making his way to the bust of Garvey, where he laid a wreath, then bowed.

The Kenyan president then made his way to the foot of the shrine, where he further engaged in pleasantries with those gathered for the short ceremony.

Soon after, he departed from the park as a member of the Jamaica Defence Force trumpeted a salute.

Kenyatta, who is on a three-day state visit, which ends today, also attended yesterday’s final day of the 67th Denbigh Agricultural, Industrial and Food Show in Clarendon and last night’s Grand Gala celebrating the island’s 57th anniversary of Independence.