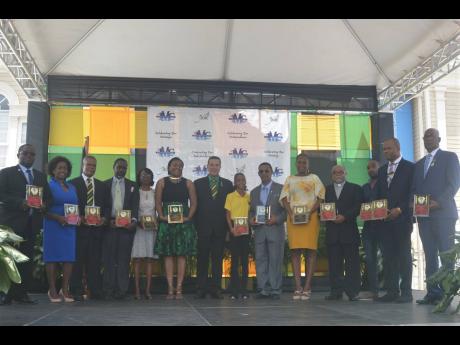 Scores of persons turned out yesterday as the St James Municipal Corporation tipped its hat to 12 persons and one organisation for their contribution to uplifting and representing the parish.

The Independence Uniform Parade, Flag-Raising and Civic Ceremony was held in Sam Sharpe Square, Montego Bay, as part of the parish’s activities to mark the 57th anniversary of Jamaica’s Independence.

Eight individuals were presented with the St James Municipal Corporation’s Spirit of Independence Award, which is given annually to citizens who have made outstanding contributions in service to the development of St James.

The sole organisation to claim the Spirit of Independence Award was Sea Gardens Resorts, for its contribution to tourism and business development.

One of the mayor’s four special awards went to 12-year-old national swimmer Leanna Wainwright, who was recognised for her contribution to sports. The other three awardees were businesswoman Gloria Henry, for business development, and clergymen the Reverend Wellesley Plummer and Ephraim Morgan, for religion.

In his address, Davis praised the 13 awardees for their years of hard work in uplifting St James in their respective fields.

“Your being awarded here today is just our way to say thanks,” he said. “You have placed yourselves among the great unsung heroes and heroines of St James and are living examples of what can be achieved through a spirit of commitment and dedication towards nation building.”