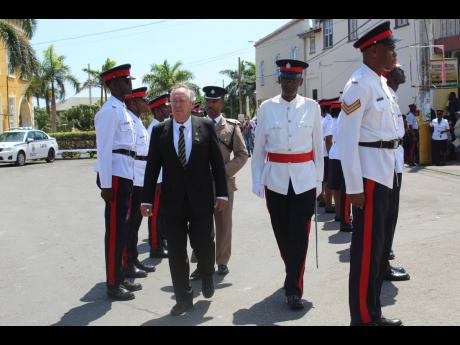 Tuesday’s absence of Falmouth’s mayor, Councillor Collen Gager, from the dais and the inspection of the guard of honour at the Independence Day Civic Ceremony in Water Square, Falmouth, has once again reignited concerns about what appears to be bad blood between the mayor and Trelawny’s custos, Paul Muschett.

With Gager’s seat on the dais still empty at 10:30 a.m., the designated start time for the inspection of the guard of honour, the custos instructed Superintendent Kurt Ricketts, the commander of the Trelawny police, to commence the exercise without waiting for the mayor, who subsequently showed up when it was over.

“When the custos indicated at the scheduled time of 10:30 that he was ready, instructions were given for the uniformed groups to be prepared for the inspection.”

When quizzed about the animated discussion, which he was seen having with the mayor when he showed up, the police commander refused to provide any details though he acknowledged that they discussed the event taking place without the mayor’s participation.

“I had a discussion with the mayor on the matter of the inspection proceeding without him,” said Ricketts, who refused to say whether the mayor was angry when he spoke to him.

When he was quizzed about why the guard of honour exercise was allowed to go ahead without the mayor’s participation, the custos explained that the event took place according to the pre-planned arrangement.

“Each group and persons participating were given specific times for their arrivals. I was the last person scheduled to arrive. I arrived at 10:25 and the inspection went off as scheduled,” said the custos.

In the ceremony that followed, the mayor spoke but made no mention of missing the inspection of the guard honour. instead, he spoke about the other contentious issue in the parish: the matter of bauxite mining in the Cockpit Country.

The animosity between the mayor and the custos came to a head publicly in June at the Jamaica Gasoline Retailers Association’s inaugural quiz competition final in Trelawny, where the mayor flatly refused to shake the custos’ extended hand or even acknowledge him.

“I don’t want to see you, neither am I bowing to you,” Gager had told the custos, who retreated without a fuss.

Subsequent to that interaction, the custos rebuked Gager’s behaviour in an interview with The Gleaner, saying that it was not the first time that the mayor had behaved in an inappropriate manner with him.

“It is the fourth time at a public function that he has failed to acknowledge me,” Muschett said. “I told him he must stop behaving like a rude child.”