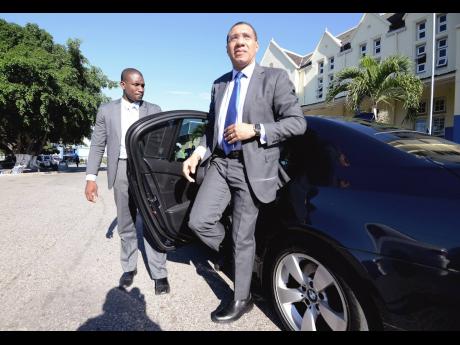 News that Prime Minister Andrew Holness’ statutory declaration for 2018 has been cleared by the Integrity Commission has provided some measure of relief for at least one private-sector leader.

Howard Mitchell, president of the influential Private Sector Organisation of Jamaica (PSOJ), believes that “this episode can now be put to bed” but insisted that the tardiness should not be repeated.

“The uncertainty was not good for all of us, so, hopefully, we can move on and that there will be regularity in filing from here on in,” Mitchell told The Gleaner yesterday.

“Lateness must not happen again. It is not good for the rule of law.”

The PSOJ boss said that he had no doubts about the commission’s certification of the numbers in the declaration.

“There are people on the Integrity Commission who have the expertise, and if they certify that this is it, then I’m prepared to accept it,” he reasoned.

Weeks had gone by and sections of the country had been waiting with bated breath for the release of Holness’ declaration. The anxiety had been fueled by remnants of questions raised by Dr Peter Phillips in 2016 over the Beverly Hills house Holness has built.

Last week, Phillips threatened the Integrity Commission with court action as he questioned the delay in the body publishing the prime minister’s filings.

But the Integrity Commission hit back, charging that it would not be rushed in doing its job and would first ensure that it was satisfied with the prime minister’s declaration.

A summary of the prime minister’s declaration to the Integrity Commission was yesterday gazetted, giving a look into the financial health of Holness and his family for January 1, 2018, to December 31, 2018.

A copy of the summary, Gazette #141, signed by the commission’s chairman, retired Justice Karl Harrison, shows that Holness, his wife, and children had income of just over $15 million.

Holness and his wife, Juliet, are both members of parliament.

In 2016 when the current parliament was formed, Holness was receiving a basic salary of $7.3 million as prime minister. He was entitled to $1.2 million in travel allowance although he drives in a fully maintained Land Rover vehicle for official duties. The Gleaner could not verify up to press time yesterday whether he still collected the travel allowance.

As for Juliet Holness, the member of parliament for East Rural St Andrew, a backbencher, she collects nearly $3.5 million per year.

According to the document, Holness and his family were holding assets of over $161 million, with $125,674,523.00 being listed under Real Estate Mortages, Receivables, and Business Investment.

The prime minister also declared that $10,642,081.92 was being held in securities and another $7 million was declared under real estate.

The document also showed that Holness has over $22 million in liabilities. A breakdown of the figures revealed that the prime minister declared $1,949,102.34 in Real Estate Mortgage. There was also a listing of Other Accounts Payable, which amounted to $20,269,080.27.

The summary declaration disclosed that Holness declared a total US dollar income of $8,125.00 for the period.

The prime minister also declared that US$28,272.11 was being held in savings accounts.

The Holness family did not declare any hard-currency liabilities.

The gazetted document stated that inter alia, “The Integrity Commission herby certifies that the statutory declaration submitted by the declarant has been examined and is satisfied that a full declaration has been made in accordance with provision of the act”.