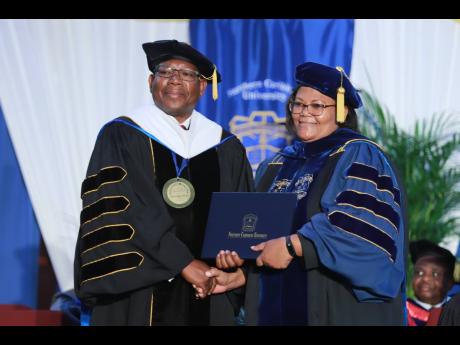 Northern Caribbean University (NCU) board member Dr Witford Reid has called for a “complete transformation” in the funding of tertiary education in Jamaica.

Speaking yesterday during NCU’s 96th Commencement Ceremony, Reid advocated for the provision of tuition support to “all Jamaicans studying at the tertiary level with no exception, be it public or private insitutions”.

He noted that this approach has already been adopted by Trinidad and Tobago and argued that NCU warranted such treatment as it is a “significant national asset”.

He commended NCU on its achievement of 100 years in Manchester as well as its 20th anniversary on receiving university status. Reid also highlighted that NCU received institutional accreditation status from the University Council of Jamaica last year.

Reid, an alumnus of West Indies College, the forerunner of NCU, attributed the institution’s success to the “leading of God’s mighty hand”. He pointed out that the institution practised “the integration of faith and learning in all subject areas”.

Speaking on the theme ‘Transformed with a Purpose: Positioned to Serve’, Reid implored graduands to adopt the mind of Christ. He suggested that this would counter corruption in the society in all occupations.

“Just imagine a politician with the mind of Christ. No more kickbacks, no more corruption, no more nepotism and cronyism,” declared Reid.

A total of 506 graduands were eligible to receive diplomas and degrees at the two-part commencement ceremony held at NCU’s Mandeville campus.