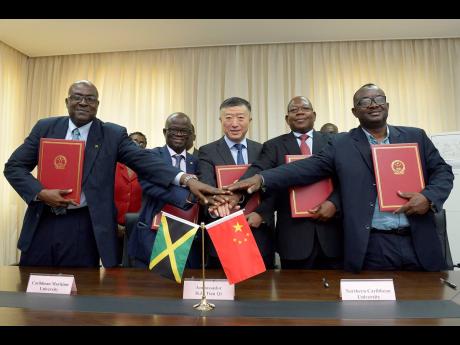 Shorn Hector/Photographer
Chinese Ambassador Tian Qi (centre) shares an iconic moment with (from left) ACP Ronald Anderson, director of the National Police College of Jamaica; Professor Ibrahim Ajagunna, acting president of the Caribbean Maritime University; Dr Lincoln Edwards, president of Northern Caribbean University; and Michael Ellis, principal of Cornwall College, following a signing ceremony of an agreement for the provision of Chinese language teachers to the institutions at the Chinese Embassy in Kingston on Thursday.

Four local institutions of learning and training have latched on to the opportunity of being able to teach their students Chinese Mandarin, when they signed a memorandum of understanding with the government and people of China on Thursday at the Chinese Embassy in St Andrew.

Roughly 10 Chinese educators will fly into Jamaica for the beginning of the new school year in September and head to the Caribbean Maritime University (CMU), Northern Caribbean University (NCU), the National Police College of Jamaica and Cornwall College to teach the language.

If successful, the programme will be continued and expanded, Chinese Ambassador Tian Qi told The Gleaner.

He said this was part of a wider move to deepen China’s relationship with Jamaica.

“Last year, according to the Chinese Customer Statistics, the trade volume between the two countries reached more than US$600 million, which covers more than 12 per cent of total trade volume between China and the whole Caribbean. Chinese investment in Jamaica has reached more than US$2 billion and China will invest more and bring more opportunities for the social and economic development in Jamaica,” he said.

The ambassador called on Jamaicans to learn Mandarin and capitalise on opportunities in China or elsewhere.

“Language is a bridge between two different people. After our young people master the language, they will open doors to each other. It will be easier for them to know the Chinese history, culture and communicate with Chinese friends and they can also find jobs in China. They can also attract more Chinese to Jamaica. If successful, we are ready to send more teachers here,” Tian said.

Though the National Police College of Jamaica is no stranger to Mandarin, Assistant Commissioner of Police Ronald Anderson, who heads the institution, said the Chinese are everywhere in Jamaica and enhancing the police’s access to the language will help them understand and communicate with Chinese nationals better.

“In 2015, the Chinese language programme was introduced to the Jamaica Constabulary Force (JCF). This today enhances greatly the JCF when we are interacting with members of the Chinese community. We train all our officers who manage our borders – to include our support groups like Customs and the Passport, Immigration and Citizenship Agency – to ensure we have somebody who can communicate with a Chinese national,” said Anderson.

In Mandeville-based NCU, more than 500 students will start their journey to become fluent in Mandarin in two weeks, said NCU President Lincoln Edwards.

“This is historic for us. We are delighted to know that our students will now have the opportunity to learn Chinese Mandarin and be able to communicate effectively with the largest people groups in the world. Over 500 of our students have signed up already,” he said.

NCU Empowerment and Training Director Michael Harvey explained that there is need to tear down silos “that exist between our people. There is not one single community that you will go to and not find Chinese who have become a part of us”.

Professor Ibrahim Ajagunna, the acting CMU president, said “Mandarin is going to be the language of commerce”, while Cornwall College Principal Michael Ellis praised the “historic” moment and expressed gratitude to the ambassador.