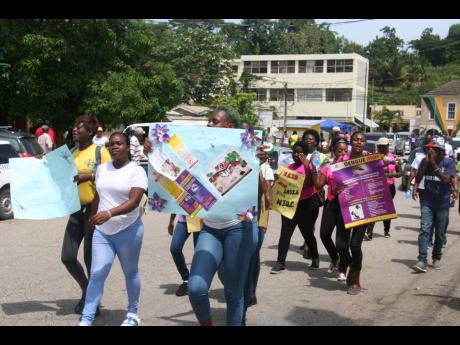 The Hanover Health Department yesterday staged a major march in Lucea as part of its public-education drive to highlight the importance of vector control and its benefits to the parish.

The staff were joined by members of the public as two groups marched from the eastern and western ends of Lucea to the municipal bus park in the town centre.

“The march is taking place in the main town, Lucea, today, but we will have other marches in the minor towns across the parish,” said Patricia Hall Patterson, the chief public health inspector for Hanover. “This is an educational programme and an inspection for mosquito-breeding sites.”

“Following the march, we are going to assist persons in the town to do inspections of their establishments – for example, food establishments, along with others – to see if there are any mosquito-breeding sites and to help them to destroy them,” added Hall Patterson.

The public health inspector said during the campaign, special emphasis will be placed on the Aedes aegypti, which transmits the dengue virus. She said the enhanced education and eradication programme will continue until December.

As persons store water in the parish because of drought conditions, she urged them to employ proper storage practices, including covering drums to prevent them from becoming breeding sites.

The Gleaner has learned that the Hanover march forms part of a national initiative by the Ministry of Health and Wellness, dubbed ‘National Call to Action Day’, which was designed to enhance the vector control programme.