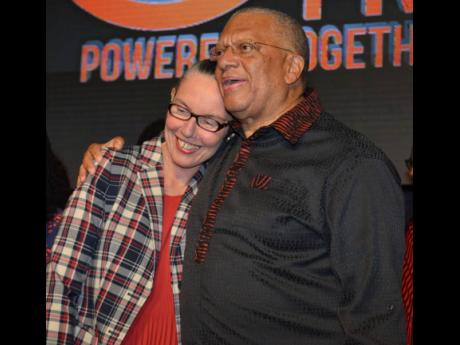 Opposition Leader Dr Peter Phillips’ wife has revealed that his 2018 statutory declaration placed the value of the real estate assets owned jointly with her at $58 million and suggested that the Integrity Commission was to blame for the grossly under-reported figure published in the Jamaica Gazette.

The commission, in a summary report of Phillips’ declaration, which was gazetted last month, disclosed that the opposition leader; his wife, well-known attorney Sandra Minott-Phillips; and children declared assets and income totalling roughly $185 million last year.

According to the summary, the Phillipses had real estate assets valued at $3.6 million, a revelation that raised eyebrows for some public commentators.

But Minott-Phillips revealed yesterday that the current market value for the home she owns jointly with her husband is $48 million, while a “tract of land” owned by her has been valued at $10 million, information she said had been disclosed to the commission.

“By further written response dated 3 July, 2019 to the Integrity Commission’s stated imperative that a value be placed on all assets declared, my husband provided the commission with estimated current market values of our real estate by way of an addendum to the information in his 2018 declaration”, Minott-Phillips said in a letter to The Gleaner.

“To be clear, my husband did not understate the current value of our real estate assets in his declaration for the year ended 31 December, 2018. The gazetted summary of his declaration was not prepared by us,” she continued.

When contacted, acting executive director of the Integrity Commission, Colonel Daniel Pryce, declined to comment, telling The Gleaner that he needed to conduct his own checks. Up to press time last night, there was no further word from him.

‘We pointed out errors’

But Minott-Phillips, in her account of how the under-reporting occurred, pointed to a string of letters between her husband and the commission, starting on June 3 this year, when the corruption watchdog agency sent Phillips the summary report and asked him to “state whether it was an accurate representation of his statutory declaration”.

She said seven days later, the opposition leader responded by identifying and listing “a few inaccuracies” in the report. Minott-Phillips said one of the things her husband pointed out was that the asset value of the real estate they jointly owned “is not declared as JMD 3,600,000”.

“He went on to point out that the sum of $1,500,000 was the purchase price for our home on the acquisition date of 21 June, 1991 and that the difference of $2,100,000 (then attributed by the Integrity Commission in its summary to the land owned solely by me) was, as reflected on its title, a parental gift to me from my father,” she explained.

She said the opposition leader also indicated in his letter to the commission that “in instances where your summary attributes a purchase price value to an asset, my preference would be for it to make it clear, perhaps by use of an asterisk and a footnote, that value represents the purchase price at the date of acquisition”.

Minott-Phillips said her husband went on to confirm the accuracy of the commission’s summary of his 2018 declaration “save and except for the inaccuracies identified”.

She said the Integrity Commission published the summary “without material alteration or correction”.

Minott-Phillips said an op-ed article published by The Sunday Gleaner suggests that the opposition leader, in his 2018 statutory declaration, declared the current market value of our real estate assets to be “a grossly understated sum of $3,600,000”.

“The representation is inaccurate because, in fact, the estimated current market value declared by my husband for real estate for the year ended December 31, 2018 was, not J$3,600,000, but rather J$58,000,000,” Minott-Phillips declared.

“... I consider the false representation to also adversely affect my own reputation by inferring that I was a willing participant in the alleged understatement of our real estate assets,” she added.