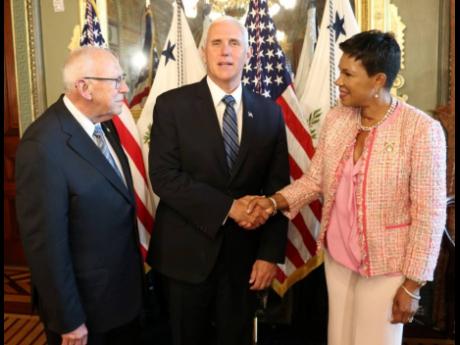 Photo by Derrick Scott
United States Vice President Mike Pence (centre) greets Audrey Marks, Jamaica’s ambassador to the US as she arrives for the swearing-in ceremony of the new US ambassador to Jamaica, Donald Tapia (left), at the White House on Tuesday.

United States Vice-President Mike Pence has lauded Prime Minister Andrew Holness for his outstanding leadership of Jamaica and, by extension, the Caribbean region.

“I want to thank the prime minister of Jamaica for his strong leadership of his country and in the Caribbean Community,” Pence said at the swearing-in ceremony of the seventeenth US ambassador to Jamaica, Donald Tapia, at the White House on Tuesday.

“I also want to thank Jamaica for its strong leadership at the Organization of American states (OAS), as both countries (US and Jamaica) work towards advancing key priorities from improving security, law and enforcement, public health and energy development. These corporations have benefited both countries,” he added.

Pence said that the US and Jamaica are natural partners, noting that both countries share cultural and economic ties as well as the core beliefs in free government and the rule of law. He offered that given the strong alliance, both nations will continue to work towards strengthening the bond.

He referenced the appointment of the new ambassador as a demonstration of the his country’s commitment in building a safer and more prosperous Western Hemisphere.

In his remarks, Tapia said he was honoured to be appointed and was committed to the task at hand.

“Jamaica’s proximity to the United States, shared values, culture and language can facilitate increased engagement, investment, trade and cooperation. Jamaica is a respected leader within the region, a strong partnership the United States deeply values,” he said.

Tapia also noted that Jamaica is ripe for development of renewable energy sources like geothermal, solar and wind power, as well as LNG.

He said further that while Jamaica’s economy continues to grow, high electricity rates reduce economic competitiveness and prevent the country from investing in other areas, such as education and business enterprises.

“I am committed to working with US businesses and within the US government to build relationships with Jamaica in these areas,” the ambassador said.

Tapia, a former Arizona entrepreneur, said that he will encourage the prosperity of the Jamaican people and the economic success and political ties in the Caribbean region.

He will take up his new appointment in Jamaica at the end of the month.