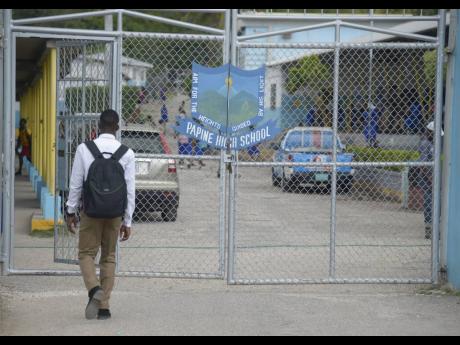 File
In this March 2016 file photo, a student makes his way towards the entrance of Papine High School on Gordon Town Road in St Andrew. 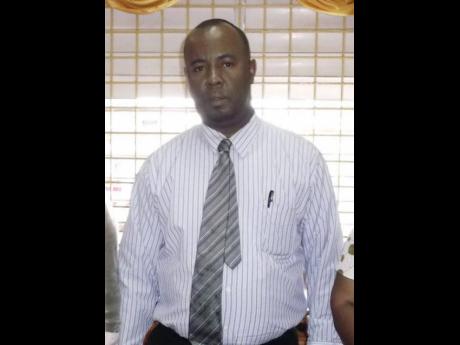 Administrators at the St Andrew-based Papine High School and neighbouring August Town Primary School have been forced to arrange counselling and other interventions for dozens of students afflicted by post-traumatic stress disorder (PTSD) and other mental health disorders.

The situation is directly linked to gang violence, which has resulted in a majority of the students losing a close relative – many times a father – to warring factions in the communities in which they live.

“The situation is compounded in that you have instances where in some classes, you have students on opposing sides. In other words, you have the survivors of the victims’ families and the perpetrators’ families sharing the same classroom,” said a source who alerted The Gleaner to the situation.

“That is potentially an untenable state of affairs. We have to intervene to ensure there is no retaliation,” the source added.

In the case of Papine High, up to 70 students are slated to receive counselling. The number could have been higher, as a survey done to determine those affected by some form of trauma did not include the grade-11 cohort, as they were doing exams at the time, said principal Leighton Christie.

“We recognised that our two guidance counsellors were being overwhelmed so we asked them to undertake the survey,” said Christie. “They did the survey and what they came up with is roughly 60-70 students who have lost a parent through gun violence and most of the parents were fathers.”

Some kids eye path of revenge

Papine High has 1,300 students enrolled and it is believed that close to 10 per cent of the school population could be affected.

“When they were doing the survey, they found some students who started breaking down. They found that the students were going through trauma but had received very little counselling, so we called in the Victim Support Unit (VSU),” Christie told The Gleaner.

The VSU, which is based in the Ministry of Justice, helps victims of crime to manage the emotional trauma associated with, and caused by, crime.

Christie said the Ministry of Education, through its education officer, was also providing support. He also revealed that child consultant and adolescent psychiatrist Dr Ganesh Shetty, from the Child Guidance Clinic, would be working with some of the children during the summer.

Christie said that much of the gang violence is situated in the August Town community, where The Gleaner understands many of the students live. However, students are similarly affected who live in communities such as Kintyre, Standpipe, Waterhouse, Grants Pen, Maxfield Avenue, Denham Town, and Waltham Park Road.

What these areas have in common is that they are mostly inner-city communities with varying levels of violence.

Christie was guarded when asked whether the gang violence affecting the students in their communities had spilled over into the school.

“We don’t see much of it in the school, but based on the nature of the communities where they are from, it’s a possibility.

“Things might play out on the road or in the communities, but we try to minimise conflicts inside the school. As soon as we hear of incidents, we move quickly to address them,” the principal said.

As part of the solution, Christie said: “We need some more boarding institutions, as some of these students need to be taken out of these communities. Some of them can be saved, but right now, you work with them at school, but they go back home into the community and are exposed to the same thing.”

He said those with weak family structures were particularly vulnerable.

“They go right back to square one,” he lamented.

Christie said a major concern for school administrators is when they see boys bonding around a common tragic event. For example, those who have lost a father tend to stick together.

“Many times they go down a negative pathway and you’ll find that revenge will be at the back of their mind.

“Most times when you see a group – I don’t want to call them a gang, but they have something in common – many times, it’s the loss of a parent,” he added.

Over the past 15 years, a number of gangs have emerged in inner-city communities that are plagued by gang violence. They bear names such as ‘Fatherless Crew’ and ‘Nah Live Fi Nutten Crew’.

The young men who form these gangs are said to have lost a male relative, often a father, to gang violence and were sworn on taking revenge. Many end up being killed or incarcerated.

A concerned Christie said the aim now is to make a difference in the lives of his traumatised students through intervention, and to “save as many of them as we can”.

Note: Read about the impact of violence on August Town Primary students in tomorrow’s Gleaner.