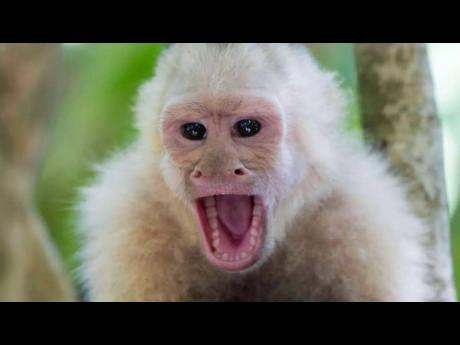 There are mounting concerns that some Jamaicans could be exposing the rest of the population to serious diseases and infections – and possibly death – by their self-serving insistence on smuggling exotic animals into the island.

Dr Osbil Watson, chief veterinarian in the Veterinary Services Division of the Ministry of Industry, Commerce, Agriculture and Fisheries, is warning that the capture of a white-faced capuchin monkey ( Cebus imitator) in Jack’s Hill, St Andrew, on Wednesday is a serious issue.

“It’s a direct threat to public health and, of course, the diseases that you can get from these animals are pretty much incurable. There is no treatment, for example, for rabies. Most viral diseases don’t really have a treatment,” he told The Gleaner.

Watson said that persons bitten by a rabid animal stand a better chance of surviving if they are able to, within minutes, get a post-exposure prophylactic, which includes a rabies vaccination and an assortment of other treatment. Otherwise, the chances of survival are very slim.

“The penalty for contracting rabies is death. Once you have rabies, you literally will die. There is no cure, so it’s a very serious risk, and whoever would take a chance on smuggling one of those exotic animals is selfish because it is a reckless and callous behaviour,” the island’s top veterinarian added. “It really is risky that someone would do something like that and endanger the lives of innocent Jamaicans.”

Meanwhile, National Environment and Planning Agency CEO Peter Knight, in confirming the monkey’s capture, disclosed that the agency has had more reports of the animals in Discovery Bay, St Ann, as well as in St Elizabeth and Kingston.

“People take it as a sort of lifestyle enhancement to have these exotic animals and it is illegal, and so what we can tell persons is that each time they (the animals) are caught, they are going to be euthanised. They are going to be put to sleep because people need to understand that this is not a joke matter,” he told The Gleaner.

He said the business of people smuggling exotic and sometimes endangered species, including birds, iguanas and primates, was not in keeping with Jamaica’s status as a signatory to the Convention on International Trade in Endangered Species of Wild Fauna and Flora.

Outside of the risk to human health and public safety, exotic animals also pose a threat to the country’s natural ecosystem and biodiversity, he added.

“The monkeys in St Ann, we have information that they are eating down everything from mangoes to banana, so it’s a big problem. And you see the problem we are having with deer over in Portland,” said Knight.

Watson pointed out that the risk of importing diseases of a zoonotic nature which are infectious and caused by bacteria, viruses and parasites that are spread between animals and humans is very real. For this reason, any monkey resident in Jamaica would need to be housed in a zoo or circus, where the necessary precautions, such as quarantine, would have been observed.

The health risk spread by viruses, bacteria, fungus and parasites carried on or in these animals is very real and include herpes, simian immune-deficiency, which is close to the human immuno-deficiency virus (HIV). The threat from these animals is magnified given that they are coming to us from out of the wild, bringing with them the risk of serious infections.

The importation and/or trade of non-native species without requisite permits is illegal. An offence under the Endangered Species (Protection, Conservation and Regulation of Trade) Act can attract a fine of not more than $2 million and/or up to two years imprisonment.