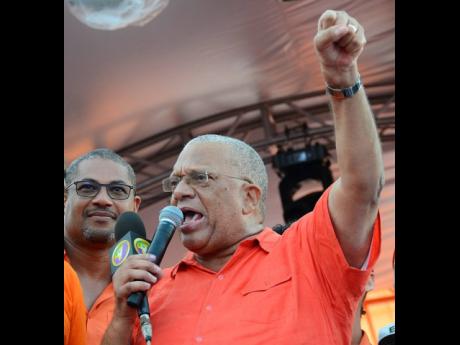 This was not the gift Bunting expected for his 59th birthday, after a hard fought campaign for the leadership position.

At 5:26 p.m. when the results were announced, it was revealed that Phillips – whose One PNP camp had campaigned for over 10 weeks telling delegates the battle between himself and Bunting was for the soul of the party – amassed 1,427 votes, while Bunting got 1,351.

There were seven spoilt ballots.

The Electoral Office of Jamaica reported a 96 per cent voter turnout.

Even as the Bunting-led Rise United camp fell hard with the loss, heavy showers at the National Arena in St Andrew dampened the tension among supporters of both camps, as the results brought both jubilation and despair.

The wafer-thin 76-vote margin for Phillips was no landslide victory, but it did not stop him from basking in the triumph, touting that the party will move forward with its socialist mission.

“Tonight is a night for celebration. Tonight is a night to celebrate the People’s National Party and what it means to us. It is a time to celebrate our philosophy that put people first. It is a time to celebrate the people who are the People’s National Party: our workers, our stalwarts, our heroes and heroines. It is time for us to remember that while we are a people’s party, we put the interest of the poor, the marginalised and the oppressed first,” Phillips, who was flanked by his wife, Sandra Minott Phillips, and children, declared in his victory speech.

The PNP leader reminded the Comrades that they had a mission to perform now that the election was behind them.

Phillips’ supporters told The Sunday Gleaner that they were pleased with the victory, as it showed that Phillips was the undisputed Comrade leader.

“I am so happy. Happy because One PNP ran a good campaign and Phillips is the man who is now charged with building the party. We have to support the leader, no matter what, and remember say him don’t go general election yet so you can’t say him can’t win. You have to give him a chance and then we will see him go ’gainst Andrew [Holness],” a vocal backer reasoned yesterday minutes after the results were announced.

“Right now, me don’t know ’bout Rise (United camp), but, to me, you have to go call nuff hearse because a pure dead over deh,” she added, pointing to the east of the arena where Bunting camp had assembled.

In a matter of weeks, the PNP will hold its annual conference, now that the dust has settled.

“Congratulations Comrade Dr Peter Phillips! A good effort Comrade Peter Bunting! The contest is over, it’s time to come together and prepare the PNP for victory,” Portia Simpson-Miller, former PNP president and former prime minister, tweeted after the results were announced.