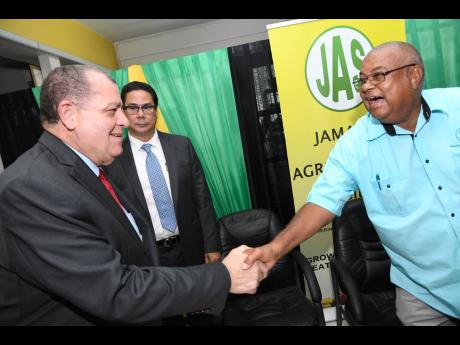 Rampant corruption in his own North East Manchester constituency, incompetence of some members of the technical staff under his command, and an out-of-step Jamaica Agricultural Commodities Regulatory Authority (JACRA) are just some of the issues Agriculture Minister Audley Shaw yesterday admitted are undermining the agriculture sector under his ministerial portfolio.

Shaw first called into question the competence of staff of the Plant Quarantine Division, which is overseeing eradication and control of the Frosty Pod Disease, which threatens the local cocoa industry, during a press conference at the Jamaica Agricultural Society’s head office at 67 Church Street, downtown Kingston.

“Even my potato programme that I have in my constituency, sometimes you have leakages and you have some people down a Mandeville a collect potato, a plan dem a plan fi go sell it. So there is so much corruption that you have to be fighting it every step of the way,” the minister declared in response to questions from farmers about distribution of produce.

Shaw also challenged the Plant Quarantine Division, which is in his Ministry of Industry, Commerce, Agriculture and Fisheries, on the strategies being used to control the frosty pod rot disease, which was brought to light in September 2017.

“I have ordered that they stop chopping down 90 per cent of the cocoa trees. I told the Plant Quarantine Division to stop it because I sent a team to Colombia. They have found that the same frosty pod is over in Colombia. They cut it back 10 per cent, and they find a way to monitor the disease and control it at 10 per cent.

“We a cut back the permanent tree by 90 per cent. That is madness, destroying the industry. So I ordered the quarantine division ‘stop it and go learn and see what Colombia a do because we going adopt some of that technology here’. Nonsense! Our people ‘bout them a cut back 90 per cent a di whole tree. You cut it down and it take you, what, three, four, five years fi build it back?”

Not allowed to continue

Responding to complaints about the exorbitant export licences, permits, and cess being charged by the JACRA, Shaw vowed that this would not be allowed to continue.

Among the issues that make it difficult to do business with JACRA is that payment of the cess by a grower, processor, manufacturer, importer, or exporter is due 10 days after the sale of the product. The charge doubles if the entity fails to adhere to the payment schedule. They must also file annual sales records with JACRA, breach of which incurs a fine of $3 million.

It was against the background of complaints about matters such as this that a comprehensive review of the JACRA was undertaken earlier this year.