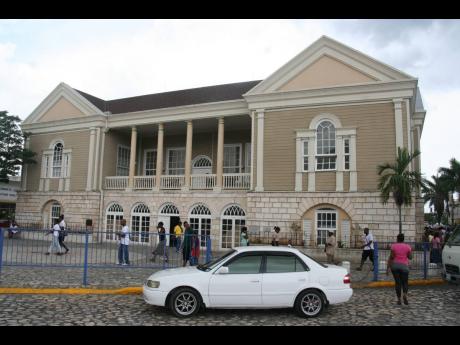 Montego Bay Mayor Homer Davis says the gay-rights group Montego Bay Pride will not be granted permission to use the Montego Bay Cultural Centre for a series of events it is planning to stage in the western city.

Davis, who chairs the St James Municipal Corporation, made the declaration after Councillor Charles Sinclair brought the plans to the attention of yesterday’s monthly meeting of the corporation.

“I saw an advertisement that spoke about a deejay performing at Sam Sharpe Square at the Cultural Centre. I didn’t even see that there was such a forum planned, but I can speak now that I will not give any permission for it,” Davis told the councillors.

“I will be seeking an audience with the committee there at the centre, and I will commence my own consultations with a view to reporting the outcome,” added Davis. “We must not do anything to disturb the sacredness and purpose of why that building is there. People have their rights, and they can do what they want to do, but you must respect other people’s rights, too.”

The Montego Bay Cultural Centre, formerly the Montego Bay Civic Centre, which sits on the site of the old courthouse, is a heritage building and a quiet cultural oasis in the middle of the bustle and noise of the city providing interactive, educational entertainment, and relaxation. On August 1, 1838, when all slaves were emancipated in the British Caribbean, it was from the balcony of the courthouse that the act was officially read in St James.

Sinclair, councillor for the Montego Bay Northeast Division, said that allowing such an event would breach the municipal corporation’s mandate to uphold Jamaica’s Constitution, which only recognises marriage between a man and a woman.

“I am not opposed if Montego Bay Pride wishes to have an event to promote same-sex marriage, but I believe it should not be held at the Montego Bay Cultural Centre. The cultural centre is a building under the management of the municipal corporation, which is a government agency,” said Sinclair.

“We, as a government agency, must ensure that we uphold the Constitution of Jamaica, and in upholding the Constitution, why would we engage a building controlled by the municipal corporation to be used to hold a function to promote same-sex marriage? It is not consistent with the mandate that we have,” Sinclair added.

Montego Bay Pride came under fire last October for hosting a week-long series of activities in the Second City in celebration of gay, lesbian, bisexual, and transgender lifestyles.