Phillips says no to mining in Cockpit Country 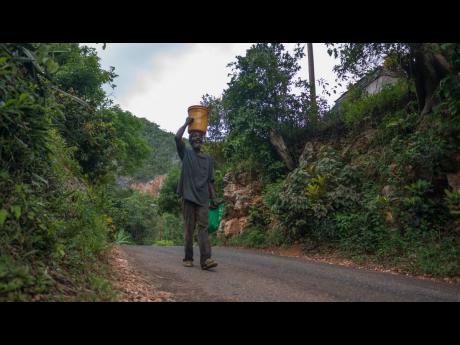 Shorn Hector
A farmer travels along a lonely road in Comfort Hall, located in the Cockpit Country, Trelawny. It is believed that bauxite mining will disrupt farming practices of residents in the future.

Opposition leader Dr Peter Phillips has urged the Andrew Holness administration to ensure that no bauxite mining activities take place in areas that form part of the Cockpit Country.

Phillips’ comments come against the background of a chorus of objections from both environmentalists and residents who have raised strong objections to bauxite mining in the Cockpit Country – an area rich in unique medicinal plants and is home to 40 per cent of the country’s domestic water supply. It’s boundaries are in dispute.

Phillips toured sections of Special Mining Lease (SML) 173, where Noranda Jamaica Bauxite Partners II was slated to start mining later this month. However, its plans were halted by the National Environment and Planning Agency (NEPA), which stated that the draft environmental impact assessment (EIA) report is now under review. It is a prerequisite to allowing mining to take place.

Like the residents in the communities of Gibraltar inSt Ann; and Sawyers, Alps and Ulster Spring in Trelawny, who are of the view that mining could negatively impact their lives economically, socially, culturally and environmentally, Phillips believes that all mining incursions in the contested area should stop.

The opposition leader has argued that the process in which areas were identified for mining was flawed and in need of review. Environmentalists and other stakeholders, including the South Trelawny Environmental Agency (STEA), have echoed similar sentiments regarding mining in the Coockpit Country.

“The process is obviously flawed in that the environmental impact assessment (EIA) was not done before the licence was issued and now it is not being shared with the people involved, even though there has been no pullback of the mining licence given in the area,” said Phillips.

“We need a balanced solution that takes account of the interest of all the parties involved,” added Phillips.

In response to a recent statement by environmentalist Hugh Dixon, who heads STEA, that the defenders of the Cockpit Country have no support from Jamaican lawmakers, Phillips declared himself an ally of all the affected parties.