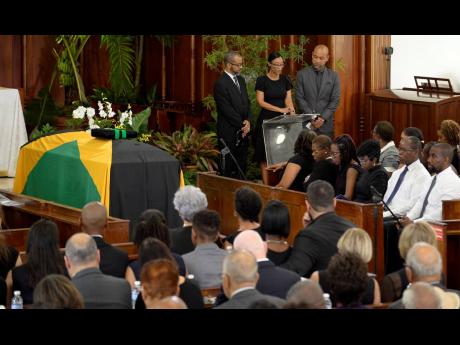 Shorn Hector/Photographer
From left: Children of the late Dr Kenneth Baugh, Gregory, Melanie, and Warren, read a remembrance during the thanksgiving service for the former politician at the University Chapel in Mona, St Andrew, yesterday.

An unwavering commitment to service and betterment of the less fortunate. That was the defining characteristic of Dr Kenneth Baugh, whether he was at home in the role of husband and father, in the operating theatre as a gifted surgeon, or on the political hustings.

The observation was made by relatives, friends, and former colleagues as they gathered yesterday to pay their final respects to the former deputy prime minister.

Melanie Schwapp reminded mourners at the University Chapel at The University of the West Indies, Mona, that wherever life took him, her father remained at the core a decent, warm, kind, and loving human being.

“Dad was the standard by which we measured everyone in our lives. In his eyes, greatness was not measured by a man’s achievements, by his physical stature, or by the girth of his account, but by how low he would bow before God. He focused on the kernel of promise in everyone he met. He knew that to achieve, one had to be given a chance, and that he did. He took those kernels, he nurtured them, and he guided them,” she said.

Schwapp said the life lessons her dad passed on were many and remained riveted in her consciousness, helping to make her the woman she is today.

Born on February 24, 1941, Baugh, who also served as minister of health and as foreign affairs and foreign trade minister in Jamaica Labour Party (JLP) administrations, died on September 1 at age 78.

In 2016, Baugh was conferred with the Order of Jamaica for distinguished service to the country, having represented the JLP for 35 years before retiring from representational politics in 2016 because of ill-health.

Anglican Bishop of Kingston, The Right Reverend Robert Thompson, in delivering the homily, said Jamaica needs a Ken Baugh at this point in time.

“Regrettably, we have reached a place in our society today where we imagine that all politicians are corrupt, and so we refer to them as the ‘Gangs of Gordon House’ as if nothing good will ever come from the people who sit there. From time to time, we encounter someone, however, like Ken Baugh, who embodied in his public life the godly images of integrity, honesty, and trust. When we can identify those qualities in someone, we cannot help but savour it because that is the best of who we are as a people,” he said.

“As a physician and a politician, he always found ways to ameliorate tough situations. He did so with such ease and with little noise since he had no need for promoting himself – a rare quality, you may say, for politicians,” Thompson added. “Much has been said about the character of Ken’s leadership … . As we give thanks for this rich legacy, might we not use the opportunity to reflect on the qualities that undergirded the kind of leadership he exemplified ... . The kind of leadership we need today is not one characterised by power and control, but a leadership of powerlessness and humility in which the suffering servant of God is made inadequate.”