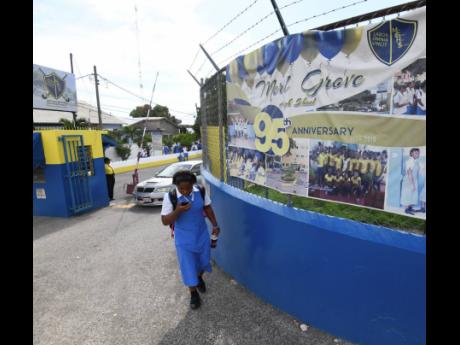 Ricardo Makyn/Chief Photo Editor
A student exits the Constant Spring Road-based Merl Grove High School yesterday at the end of the school day. The school has reportedly collected fingerprints of its students.

Yet another Corporate Area-based school has found itself embroiled in controversy, this time for allegedly collecting fingerprints from students.

Merl Grove High School is reported to have begun collecting the biometric data from students during its orientation exercise at the start of the new academic year as part of a new attendance record-keeping system.

“So they started with grade seven, and we thought [because we are] in sixth form that we didn’t have to do it. We thought they were just starting with grade seven since they are the new batch, but they did every single grade straight up to upper six,” a sixth-form student told The Gleaner yesterday.

The student, who spoke to our news team on condition of anonymity, said that her fingerprints were taken last week.

“It was [done] in the teachers’ lounge. Two people from [a security company] came, and they had a computer with our names on it and the machine where we should put our finger. I placed my finger there about two or three times, and it recorded it or scanned it,” she said.

Other students shared similar accounts yesterday when The Gleaner visited the 95-year-old girls’ school, which is located on Constant Spring Road in St Andrew.

The student’s mother, who only found out about the exercise after the biometric data had been collected, was appalled.

“I feel very distressed and disrespected because something as important as this – and you know that biometric data has been in the headlines – the school went ahead, did this, and never said anything. There was no letter. When the school wants to get in touch with me, they do. I get emails, I get phone calls. [This time], I got nothing,” said the mother, who also did not want to be named.

The Reverend Anthony White, chairman of the school board, told The Gleaner yesterday that he was unaware of any such system at the St Andrew-based institution.

It is understood that teachers currently use a card to sign in for work.

Up to press time, Principal Dr Marjorie Fullerton could not be reached for comment.

The development comes as discussions rage on about the constitutionality of collecting biometric data, including fingerprints, from individuals who have not been implicated in a criminal matter.

It was revealed this week that Mona High School in St Andrew had implemented a biometric system for teachers to sign in on arrival at work. Principal Keven Jones said that it was instituted to combat dishonesty among some teachers who were falsifying their attendance records.

On Tuesday, Karl Samuda, minister without portfolio in the Ministry of Education, instructed that the practice of collecting fingerprints from teachers in public schools must cease.

It is not clear if this also applies to students of public schools.

The Gleaner could also not ascertain whether the administration had made efforts to get feedback or permission from parents before collecting the students’ fingerprints.