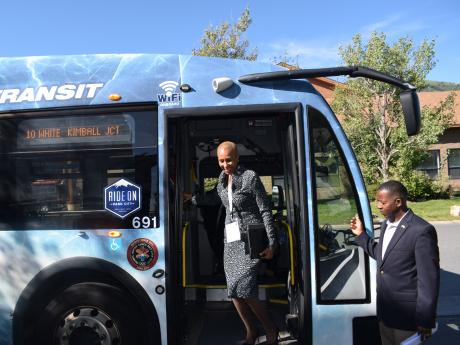 Energy Minister Fayval Williams disembarks an electric bus after a tour in Park City in the United States. Looking on is Elvis James, political and economic specialist at the United States Embassy in Kingston - Damion Mitchell photo 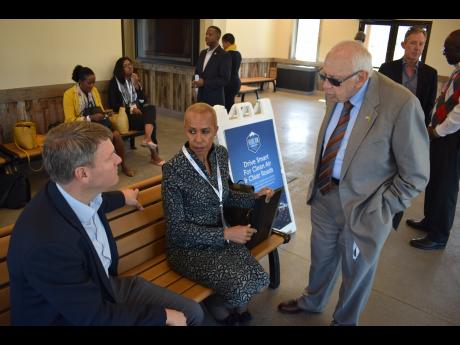 Alan Westenskow (left), director of Proterra, an American automotive and energy storage company, in discussion with Energy Minister Fayval Williams and Ambassador to Jamaica Donald Tapia during a tour of Park City in the United States. - Damion Mitchell photo
1
2

The switch from the current diesel-fuel operated fleet of the Jamaica Urban Transit Company (JUTC) would demand significant capital cost, but Williams says there could be favourable long-term savings.

The minister is part of a Jamaican delegation now in Utah in the United States for the Solar Power International trade show.

“It is encouraging,” Williams said, after a tour of Park City in Utah aboard one of the e-buses that provides free public transportation for 7,000 people living and working there who are encouraged to park and ride.

United States Ambassador to Jamaica Donald Tapia, who is also a part of the delegation, said it is inevitable that e-vehicles be integrated in economies like Jamaica’s. IN PHOTO: Alan Westenskow (left), director of Proterra, an American automotive and energy storage company, in discussion with Energy Minister Fayval Williams and Ambassador to Jamaica Donald Tapia during a tour of Park City in the United States.

He recognises, however, that it will be a costly venture.

“You're looking to the future. We always try to look to the past to things that fail, but right now this is the new generation that’s coming,” Tapia said, adding that in another 10 years, he expects to see greater interest in electric vehicles and so, it is important to begin building out the infrastructure, whether through a government initiative or through private-public sector partnerships.

Alan Westenskow is the director of Proterra, an American automotive and energy storage company that designs and manufactures electric transit buses and electric charging systems. He said it costs around US$750,000 (J$102 million) for an electric bus. But, with a life cycle of roughly 12 years, he insists the high capital outlay is recovered because of the low maintenance cost and the fact that e-buses do not use expensive diesel fuel. More importantly, he said, there is no emission in the environment.

A few kilometres from the site of one of the charging stations in Park City, from which Westenskow spoke, was the bobsled track where Jamaica competed in the 2002 Winter Olympics in Salt Lake City.

In the meantime, Williams said, she will be having discussions with Transport Minister Robert Montague with a view to examining the possibility of introducing e-buses to Jamaica.

Westenskow said built into that discussion must be the consideration for adequate charging stations and operating temperatures which impact the efficacy of electric vehicles.

But what about Jamaica’s frequent traffic jams and hilly terrain?

The Proterra business development director said an advantage of e-buses is that they are built to auto-recharge energy when decelerating and they are also constructed to travel in mountainous areas.

The JUTC has been hunting savings on its fuel bill which, according to figures contained in the public bodies report, for 2016-18, topped $2 billion. For the fiscal year ending March 2019, the bill was projected to rise by 46 per cent, from $2.52 billion to $3.68 billion.

The company had been considering the use of LNG as a first step in cutting the cost to operate its 500 plus buses.