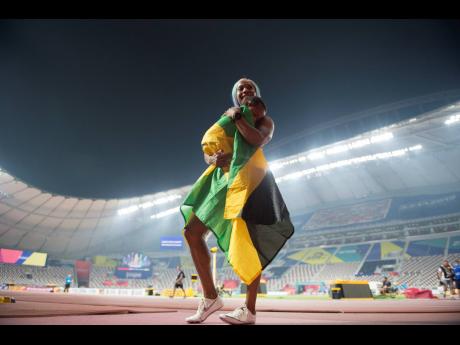 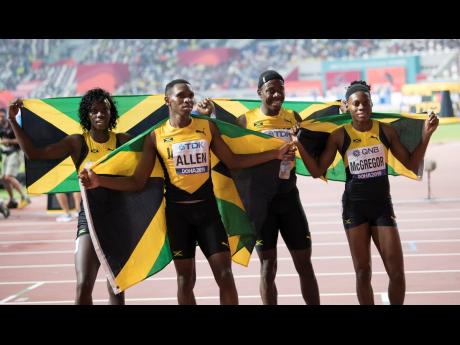 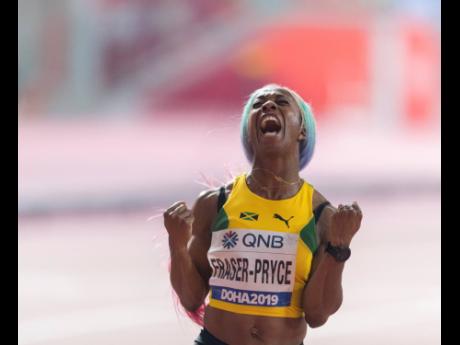 Jamaica’s Shelly-Ann Fraser-Pryce blushed at the suggestion, but two Olympic titles and, now, an unmatched four World titles in the 100m make her the greatest of all time in the event.

Fraser-Pryce, in what she described as a victory for motherhood, last night produced a stunning 10.71-second win in the women’s 100m final at the World Championships in Doha in a truly majestic performance that both defied logic and firmly affixed the crown atop her head.

“I will be honest with you. I don’t really get caught up with all of that. I just focus on being the best athlete that I can be and continuing to inspire women and young girls in understanding that there is so much more that we can achieve if we work hard and stay committed.

Her win comes two years after giving birth to son Zyon, who, incidentally, arrived one day after the women’s 100m final at the London 2017 World Championships. He, too, shared in the celebrations, along with a sprinkling of supporters inside the Khalifa International Stadium.

“This defies so many logics. A lot of persons like to say what can be done and that having a baby slows you down, but it did not slow me down, it actually made me faster,” she added before laughing off suggestions that maybe she should have another. “No more for me. I still have hopes of 2020.”

Looking back at her journey, Fraser-Pryce admitted to struggling with doubts at some points, but recognised that her victory represented much more than the medal she will receive here. For some, the fact the Doha 2019 medals were designed by an all-woman team adds a tinge of romance to the story.

“It’s a victory for motherhood. I am really excited about tonight. It took a lot of hard work and sacrifice to get here tonight. I remember when I found out I was pregnant, I was a wreck. I remember sitting on my bed for two hours and I didn’t go to practice because I didn’t know what to do, but I made a vow that I was coming back,” she reminisced.

Fraser-Pryce will now turn her attention to the 4x100m relay after her coach, Stephen Francis, decided to pull her from the 200m.

Puzzling call, but she could not provide any insight into the decision.

While there was delight for Fraser-Pryce, there was palpable disappointment for Elaine Thompson, with the double Olympic sprint champion struggling to find top gear, crossing the line fourth in a time of 10.93 seconds.

“Honestly, I am so disappointed. I didn’t get on the podium, but what can I do about that?” Thompson said. “The legs weren’t firing. I just have to move on to the 200m and, hopefully, I can get a medal.”

“I will not blame the Achilles, even though I came here with a little pain. It was really sore over the past four days, but I didn’t think it would affect me tonight,” she added in response to questions about any possible issues with her long-time injury.

There was a second medal for Jamaica yesterday, as the mixed 4x400m relay team – which featured Nathon Allen, Roneisha McGregor, Tiffany James, who was brought in to replace Janieve Russell, and Javon Francis – secured silver after finishing second in 3:11.78 to the United States, who clocked a world-record 3:09.34. Bahrain (3:11.82) bagged the bronze medal.

Rasheed Dwyer is also through to the next round after a laboured 20.37 third-place finish in his heat, which was won by Canadian Aaron Brown (20.10), with Great Britain’s Racers-based Miguel Francis taking second in 20.11.

The other Jamaican in the 200m, André Ewers, was reinstated to the 200m semis after a successful appeal by the Jamaican management after being flagged for a lane violation.

He had finished fourth in 20.41 seconds in his heat.