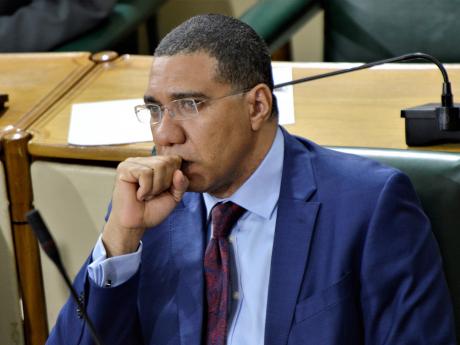 It's the question Jamaica's Foreign Affairs Minister Kamina Johnson Smith and the parliamentary secretary in the Office of the Prime Minister (OPM), Robert Nesta Morgan, have been struggling to answer: Why did the Government want to increase from 20 to 70 years the period for which Cabinet documents may be banned from public access?

The controversial proposal has been met with intense public outrage and, according to Johnson Smith, will be withdrawn at Friday's sitting of the Senate and during next week's meeting of the House of Representatives.

But why was it made in the first place?

Johnson Smith told Nationwide Radio that it arose from a request under the Access to Information (ATI) Act for Cabinet minutes for 1975 and 1976, which would include the period of a state of public emergency in Jamaica.

Morgan went further, explaining that the ATI application included a request for personal information for persons dead or alive.

"That does not justify a BLANKET 70 YEAR EXEMPTION OF ALL CABINET DOCUMENTS," she posted.

Listening to @NestaJA telling @cliffnationwide that the resolution arose from an ATI request for Cabinet minutes from 1975-76, which would have included personal information. That does not justify a BLANKET 70 YEAR EXEMPTION OF ALL CABINET DOCUMENTS! #AccessToInformation #Jamaica

"Redactions are done everyday (sic) for those of us who use the act to access info," Calder posted.

In the meantime, the OPM, in a statement this afternoon, said that the request for Cabinet documents that triggered the 70-year secrecy proposal will be reconsidered.

"The Government appreciates and understands the sentiment of the Jamaican people and has a duty to thoroughly explore and consider all the issues before it and balance competing rights to achieve equity," said an OPM spokesperson.

Meanwhile, the Office of the Leader of the Opposition has rejected as false a claim by Morgan that before signing the order for the 70-year block, Prime Minister Andrew Holness had discussions with Opposition Leader Dr Peter Phillips and there were no objections.

"The leader of the Opposition told the prime minister immediately that 70 years was too long," said one of Phillips' aides, Colin Campbell.

He said that the prime minister had replied by saying that it was the standard and that the opposition leader told him that he would check.

According to Campbell, there was no further exchange on the matter.