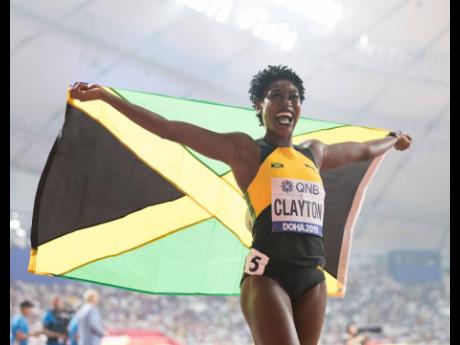 Gladstone Taylor/Multimedia Photo Editor
Rushell Clayton is ecstatic as she celebrates a bronze medal in the women’s 400m hurdles final at the 2019 IAAF World Athletics Championships in Doha, Qatar, yesterday. Clayton placed third with a time of 53.74, her personal best in the event.

Two years ago, Rushell Clayton was considering her future in athletics.

Today, she is a World Championships 400m hurdles bronze-medal winner after stopping the clock in a personal-best 53.74 seconds to move Jamaica’s medal tally to seven here in Doha – 2 gold, 3 silver, and 2 bronze.

“I am just super happy! When I looked up on that screen and I saw that 53.74, I remember the piece of paper that I had beside my bed that said 53.7 for the 2019 season. So I actually shed a few tears while sitting down there on the track,” Clayton said, beaming.

American Dalilah Muhammad further lowered her own world record to 52.16 seconds to take the gold medal, edging her compatriot, Sydney McLaughlin, who also clocked a personal-best 52.23 seconds for second in an exciting contest at a packed Khalifa International Stadium.

The Jamaican national champion, on the back of a season of consistent improvements, has looked every bit the part at these championships, showing her medal credentials since her first-ever run at this level – an easy 55.23 in the heats, and again in her semi, which she won in 54.17 seconds.

She took that confidence and composure with her into last night’s final, with those traits being most evident with about 120m to go as she rubbed shoulders with the rest of the field, hurdling the eighth obstacle in synchrony, with Muhammad and McLaughlin long gone in their own race within the race.

Clayton dug deep, finding an extra gear, gradually creating daylight between herself and the pack, to secure her place on the podium. Her effort made her the fifth-fastest Jamaican in the event, matching Ristananna Tracey’s time from the London 2017 championships, where she, too, won bronze.

Interestingly, Clayton admitted that after completing her studies at the University of the West Indies in 2017 – the same year she finished seventh in 57.09 seconds at the National Senior Championships – she found herself questioning her future in the sport and doubted whether her ambitions would ever be met.

“Yes, I honestly felt that I was going to give up right when I was coming out of university, but my coach (Okeile Stewart) said he had my back. He told me we would do it together and that he believed I could do it. So my coach is the life-changing person in my life right now,” said Clayton. “He took a chance with me. When I finished college, I didn’t know what I was going to do. I didn’t have school anymore, I didn’t have a scholarship anymore, so how was I going to do this? He told me we would do this together and that he had my back and I am really happy to be here with him celebrating a bronze medal.”

Despite suffering a fracture to her metatarsal, Clayton wrote on a piece of paper at the beginning of this year that she wanted to run 53.7 seconds.

Stewart’s reminder of that note, which she placed at her bedside, was the motivation she needed.

“This is all my coach. He knows me best and he told me exactly what to do. He told me to run my race, stay comfortable, stay compact, hurdle and push on the ground, and that is what I did,” Clayton said. “I came to this World Championships to get a medal. Nobody goes to the World Championships just to compete. We all come here to get a personal best and a medal and to make yourself and your country proud because this is your job. You don’t get up every day, practise for hours to just run a race. You come to give it your all and I’m happy I managed to do all of that.”

Clayton’s win was the highlight of a mixed day for Jamaica at the championships.

Demish Gaye produced his best ever time (44.46) to finish fourth in the men’s 400m final, which was won by Bahamian Steven Gardiner in a national record 43.48 seconds, with second going to Colombia’s Anthony Zambrano (44.15), and USA’s Fred Kerley (44.17) getting the bronze medal.

The women’s 4x100m relay team of Natalliah Whyte, Shelly-Ann Fraser-Pryce, Jonielle Smith and Natasha Morrison won their heat in 42.11 seconds and have the fastest time going into today’s final at 10:05 p.m. (2:05 p.m. Jamaica time). But there was no such success for the Jamaican men, with the team of Oshane Bailey, Yohan Blake, Rasheed Dwyer, and Tyquendo Tracey failing to make the final after their 38.15 fifth-place finish in their heat.

This is the first time since the 2001 World Championships that the Jamaican male 4x100m relay team will not feature in the final of the event.

Shanieka Ricketts and Kimberly Williams will line up in the women’s triple jump final at 8:35 p.m. (12:35 p.m.) tonight with hopes of increasing the country’s medal tally.