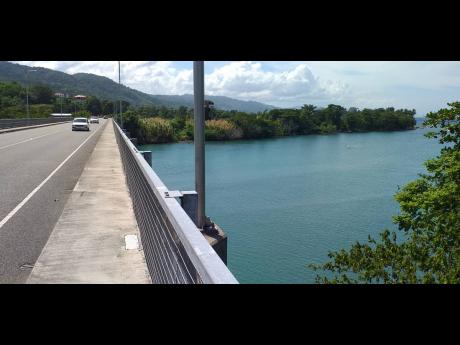 Photo by Gareth Davis Sr
The Rio Grande runs beneath the bridge from which the dean in the Faculty of Science at the College of Agriculture, Science and Education (CASE), Fiju Matthews, is believed to have jumped on Saturday.

Divers from the Jamaica Defence Force (JDF) are expected to join the search for an educator who went missing on the weekend after he allegedly jumped off a bridge into the Rio Grande at St Margaret’s Bay in Portland.

The missing man has been identified as Fiju Matthews, who is the dean in the Faculty of Science at the College of Agriculture, Science and Education (CASE) at Passley Gardens in Portland.

Local divers spent Sunday and much of yesterday combing the murky waters of the Rio Grande in search of Matthews, who reportedly jumped off the bridge shortly after 11 a.m. on Saturday after parking his motor vehicle nearby.

Deputy Superintendent of Police Beresford Williams told The Gleaner yesterday that so far, the matter is being treated as a missing person case as no one has come forward with any supporting evidence to prove that the educator actually jumped into the river.

“The JDF Coast Guard is putting together a team of divers,” the cop added.

“We have no confirmation that he is deemed dead. ... We found his car at St Margaret’s Bay and it was removed to Hope Bay,” he said.

Matthews, who has been employed to CASE for approximately 15 years, was very popular among students. He is being saluted for his ability to develop new methods and also to conduct scientific research, which allowed for that institution to broaden its service delivery and diversity.