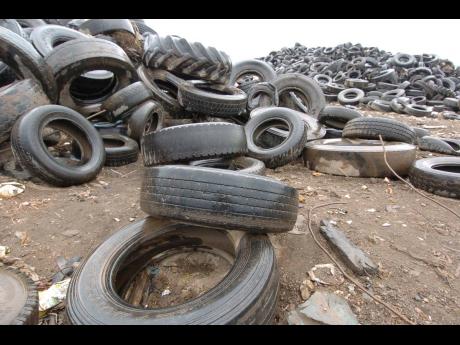 File
Tyres piled up in the vicinity of the Riverton City disposal site.

Private entities are lining up to purchase used tyres that for decades have been catalysts for deadly fires at disposal sites operated by the National Solid Waste Management Authority (NSWMA), but the company’s enterprise team is reportedly dragging its feet on getting rid of them.

At least two major companies have approached the NSWMA’s administration asking to purchase hundreds of discarded tyres but, according to Audley Gordon, the authority’s executive director, no arrangement can be made with them at this time.

“There is a lot of private interest in the used tyres but the enterprise team kind of ties us to what we can and cannot do,” said Gordon, who was addressing a recent Gleaner Editors’ Forum at the newspaper’s North Street, Kingston offices.

“One group that met with us, they could take all the tyres we have and more. We can’t find tyres to give them. But we can’t touch it yet,” he said, limiting his criticism of the body which has in the past come under fire from himself and the NSWMA’s chairman, Dennis Chung.

Questioned about what operators of disposal sites, such as that at Riverton City in Kingston, do with the used tyres, Gordon said the state body currently has an arrangement with the Caribbean Cement Company, which uses them to fuel their kilns.

“We have a memorandum of understanding currently with the cement company, where we are moving tyres to them, in a pilot project of course. We believe that, based on where it is going, it will pretty much become a permanent thing,” said Gordon, adding that several measures have been taken in recent years to secure the tyres at the disposal facilities.

Plumes of smoke from burning tyres, including during a 2015 fire which lasted for more than a week at the Riverton site, has repeatedly impacted nearby communities.

Most of the fires are reportedly started by protesting residents from nearby communities who use the dump as a means to make a living. Millions of dollars are spent on material and equipment to extinguish such fires, and also prevent further combustion.

Gordon’s sentiments came four years after then local government minister Noel Arscott promised the full removal of all tyres from the Riverton City disposal site to a location approved by the National Environment and Planning Agency.

Arscott said at the time that the NSWMA was partnering with the Ministry of Agriculture and Fisheries to remove 5,000 tyres that were slated to be used to construct artificial reefs.