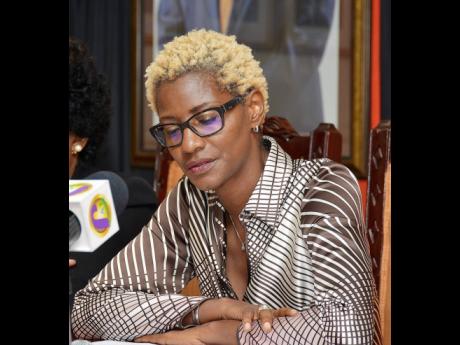 Jennifer Housen, who had backed Peter Bunting in a losing effort to wrest the presidency of the People’s National Party (PNP) from Dr Peter Phillips, is claiming that forces bent on sabotaging her were enabled by the party hierarchy ahead of her exit last year as standard-bearer for West Rural St Andrew.

Housen, a practising attorney who lived in the United Kingdom for some time, had been announced back in mid-2018 as one of those among the group of women the PNP was depending on to thrash the governing Jamaica Labour Party in its bid to regain state power.

However, as the election season draws near, the party is again in search of a candidate to beat Olympian Juliet Cuthbert-Flynn at the polls.

Housen had resigned by November.

When she was initially contacted by The Gleaner, she had been tight-lipped about the issue.

“I will neither admit it ... nor do I deny it,” Housen tersely said then about whether she had resigned, deferring to PNP General Secretary Julian Robinson.

But now, almost a year later, the attorney has broken her silence, making it clear she does not believe the issue was with her as her popularity in the seat was never in question.

“My departure as the caretaker of West Rural St Andrew was certainly not precipitated by the Fifth Column that operated there. By no means,” Housen says in a column published in The Sunday Gleaner today.

“I had the strength in depth to deal with those. It was the enabling of that Fifth Column by those ‘up above’ that was to be the proverbial back-breaking straw. The repeated complaints to the then party regional hierarchy to deal with the constant undermining and sabotage was met with ‘just press on Comrade’,” Housen recounted of her experience.

She said the Secretariat of the party failed to deal with the problems she was having in the constituency, and so did the Executive.

Political newcomers often require substantial help from the generals of their party, but Housen also felt she was not getting that support either, and she was left on her own in her quest to bag what is a must-win seat for the PNP.

In her resignation letter to Robinson last year, Housen lamented that her first meeting with Phillips was 17 months after she had been on the ground working in the constituency and five months after she was officially installed there.

The former caretaker also claimed to have spent $600,000 of personal funds in an effort to organise the constituency.

In her column today, Housen rips into the second-tier leadership, consisting of mostly councillors and councillor-caretakers, over ‘laziness’. That too, she claims, has been hugged up by the party’s hierarchy.

“There are deep problems generated by those who seek power in the PNP’s second-tier leadership in West Rural St Andrew. Laziness is chief among those problems. But when the hierarchy enables sloth of that second-tier cadre, because of their potential (perceived) utility, it breeds stagnancy,” the former caretaker said.

“Until the hierarchy takes responsibility, and deals with the deep-rooted issues, no amount of ‘parachuting-in’ anyone (to the detriment of those already there) can fix them. It is no more than putting a Band-Aid on a leaking, festering sore,” Housen added, while noting that eyes are on the party’s youth organisation president, Krystal Tomlinson, for the role of standard-bearer in the constituency.

The Sunday Gleaner understands that the PNP is to come to a decision shortly on who will succeed in that role in a constituency that has swung to the winner of every general election since 2007.